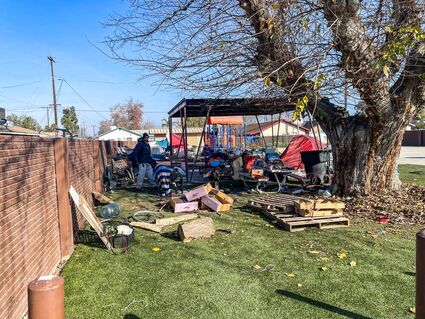 The task force focused on the issue of homelessness at Southgate Park on 15th Street and G Street during a meeting Jan. 25.

During the meeting, discussion began with a definition of the two types of homeless. One is the homeless person due to circumstances and would most likely be willing to take advantage of services offered while the other is the homeless person who chooses to remain homeless and doesn't want any help leaving the situation.

"Homelessness is a problem for everybody here," Recreation and Park District Program Director Juan Bernal said. "It's a problem everywhere in the state and the country."

Bernal said even with code enforcement and law enforcement available, they can't force the problem out of the park and into the neighborhood by removing the homeless because they will just find another place to gather.

Bernal added that a long-term solution needs to be found for the community.

"Is this a seasonal thing?" an attendee asked.

Shinn responded that it was not seasonal, but an everyday issue and saidhe has been in touch with the city manager, Scott Hurlbert, and there is no simple solution to this crisis. They will be meeting later this week to further discuss this issue.

Shinn said the city had enacted camping laws; however, in 2018, the Ninth Circuit Court of Appeals on Martin vs. City of Boise prevents law enforcement from preventing camping.

In 2019, the United States Supreme Court declined to hear the case. The Supreme Court stated that community laws cannot be enforced unless there is a place where the homeless can go.

Shinn reached out to Deputy District Attorney Pelton and spoke about the Wasco community.

One of the options, Shinn said, is to provide a location where the homeless can sleep, get a meal and shower. Shinn also stated that no one wants a homeless shelter in their neighborhood because property values will go down and the homeless will be walking through neighborhoods to get where they want to go. He also mentioned that many are intimidated by the homeless, especially the ones who choose this lifestyle.

Council member Vince Martinez added that a portion of the residents want to help in this situation.

Shinn provided an example of meeting the first homeless person who stayed at the park. Shinn was told to leave him alone, he didn't want any help.

District Recreation Board member Sharon Sharp was asked to report on what action the board took at its recent meeting regarding Southgate Park. Sharp reported the board unanimously agreed to begin construction of a fence at the park. The bathroom will also be removed; however, it was mentioned that the city might be obliged to provide a restroom due to sanitation issues.

Shinn also mentioned that criminal activity has increased due to the homeless.

He said if there are posted signs of no entrance, the person can be ticketed with a trespassing violation and given a choice to leave or spend time in jail.

"The city has better luck dealing with trespassers than with narcotics," Shinn said. "If trespassing, then they can go to jail; but with drugs, they are out within six hours."

The discussion on Southgate Park will be continued at future meetings.