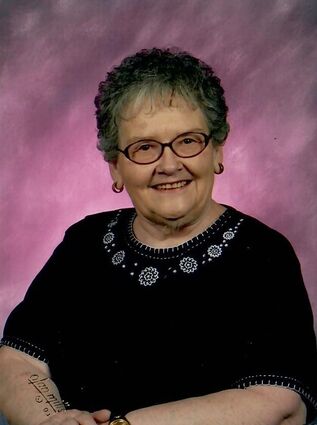 Because Mr. Annin was the principal of Calaveras Union High School in San Andreas at the time, the student body decided to take the rest of the afternoon off and celebrate this occasion!

The family later moved to Avenal where Mr. Annin became the principal of Avenal High School. The family returned to Wasco in the early 1940's to take over the family farming operation. Mary Lou continued her education through high school in Wasco, junior college in Bakersfield and graduated from San Jose State College where she received her degree as an occupational therapist. After graduation she was employed by the Visalia School District as a therapist at Conyer School District. A career that lasted more than 30 years. Her great love was working of all the special needs students, she never gave up on her students.

Mary Lou was preceded in death by her parents and brother. She is survived by her sister, Alice Ann Annin of Wasco, the last of her generation, and three nephews.

Graveside services will be held Tuesday, Feb. 22 at 2 p.m. at Wasco Memorial Park followed by a memorial service and reception at Peters Funeral Home, 1401 7th St., Wasco. In lieu of flowers, donations may be made in Mary Lou's memory to Wasco Community Scholarship Association, P.O. Box 7, Wasco 93280.