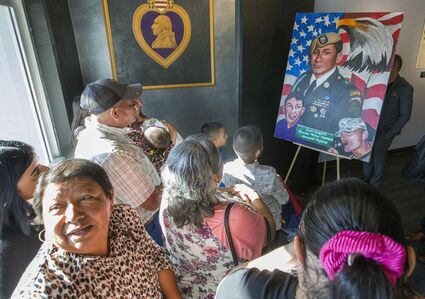 The gallery is the home of a tribute to local hero Ricky Barraza, who was killed while serving overseas.

National Vietnam War Veterans Day is March 29 and will be commemorated with a special ceremony at the Portrait of a Warrior Gallery in downtown Bakersfield.

Local author Barry Bongberg will be on hand to help celebrate the event. Bongberg wrote a book of his experiences in the Vietnam War titled, "Dear Mom and Dad: Letters from Vietnam War."

It recounted his daily struggles as a teenager forced to grow up quickly in the field of Vietnam.

Bongberg said this ceremony is special to him and is a celebration that recognizes the sacrifice and bravery that was shown by the men and women of the armed forces in this war that was not a popular one back in the United States.

March 29 has been proclaimed Vietnam Veterans Day since President Barack Obama made it so back in 2012. The proclamation called upon all Americans to observe this day with appropriate programs, ceremonies and activities that commemorate the efforts of the U.S. troops in this conflict.

March 29 was chosen as the date because on March 29, 1973, Military Assistance Command, Vietnam was disbanded and the last U.S. combat troops departed the Republic of Vietnam.

Bongberg will be there with copies of his book, as well as other authors with their creations. There will be a couple of special speakers at the event. Retired Lt. Col. Joseph Drew of the United States Army will be there to talk of his experiences in Vietnam.

The event will also include Lyn Eckert, a Vietnam–era Marine that will speak on her many years of service. Eckert, a Kern County native, was the only female veteran on Honor Flight 42 and was inducted into the Women in Military Service America Memorial.

The event will be from 9 a.m. to 10 a.m. and will include a "Last Roll Call" ceremony. This is a special part of the ceremony in which the soldiers who had died in the conflict are named, giving them a moment of remembrance for their ultimate sacrifice.