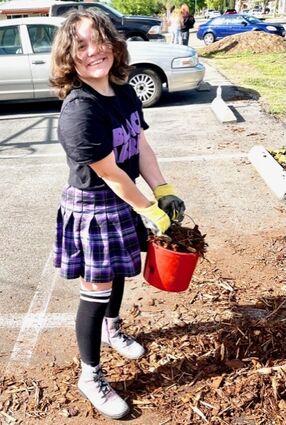 A rose garden was planted in Barker Park to beautify the City of Wasco. It was the hard work of many.

Sharon Nicol led the team in creating an enchanting space for the community to enjoy, with generous donations and volunteers bringing the rose garden project to life.

The Wasco High Future Farmers of America, the local Boy Scouts troop and the Wonderful Academy, to name a few, lent a helpful hand.

"We began work on the rose garden in October. Nancy Waterhouse played an essential role in the design and execution. We also received tremendous assistance from [the city's] Parks & Recreation [department] as they facilitated the space," Nicol said.

"With over 50 volunteers on our first day of planting, an excellent turnout of Wasco citizens brought the rose garden to fruition."

Mayor Gilberto Reyna also attended to show the city's support of the initiative.

The rose garden was made possible through the generosity of Week's Nursery and Neuhouse Farms. Almost $4,000 in monetary gifts were raised by individual Wasco residents to fund the project.

"This proves that the people of Wasco are good-hearted," Nico saidl.

Laying the bark completed the final stage of the rose garden. The Boy Scouts will be building benches alongside the garden for visitors to sit and appreciate the view.

It will be a test run to determine the project's next phase, which is to build another rose garden adjacent to the area.

"Parks & Recreation played an integral part in the process. They have agreed to maintain the garden, and we are excited about the possibility of planting another," said Nicol.

Volunteers, young and old, brought their gardening tools and rolled up their sleeves as they worked diligently.

"It was great for local kids to improve their home. They can return in years to say I did that," said Wasco High School Ag teacher Tony Farao.

Students said it was something different to do.

"It seemed like a good way for me to get out of the house and participate in an activity that will make a difference. As teenagers, we don't really go outside anymore," said Amber Newby.

Those that contributed their time made friends while being of service.

"I thought today was important because it brought everyone together, and I met new people," said Lauren Lee.

"It was delightful being here with a lovely group. I also love gardening, and it was special to collaborate with others I had never met before," said Esmeralda Rodriguez.

Others relished in the garden's beauty and shared their thoughts on the impact.

"The best part is the smell of the wood chips and the pretty colors it will bring. Once the roses grow, they will look very nice for many generations in the future," said Gerad Garza.

"I think this will bring more greenery to the town. We want to have more than just sidewalks. It was a chance to be a part of an effort to improve Wasco and make it an incredible experience for all in years to come," said Vicki Newman.