Camp Hamilton memorializes veterans from all branches of the US military.

Camp Hamilton, with its lush stand of trees among a desert of oilfields, held its annual Memorial Day Service on Monday, remembering all of the veterans who have served our country in all branches of the military.

Visitors gathered from all over Kern County to be a part of this tradition and ceremony. Camp Hamilton is a veterans memorial park that serves as a respite for veterans and their families. The grounds harbor a grove of trees that have been planted to memorialize Kern County soldiers, their friends and families able to visit the living memorials, including Shafter veterans, such as Noel Wilson, who was recently honored with a tree planted in his honor.

The Memorial Day celebration included several speakers and a tree ceremony, followed by a raffle and a barbecue. The day was a special one for many local people. Martin Gonzales, who has been going to the event for a few years, said that he would never miss it. "I will always remember the boys that we lost when I was in 'Nam. I still remember their names and hometowns, and still miss them today."

The sentiment was a common one on the day. The majority of the attendees had loved ones that served in the military, or have friends who were serving. Camp Hamilton has become a very popular destination for those in need of some inspiration.

The seed of the idea to create a veterans park was first planted in the 1970s, when another Marine and Vietnam combat veteran, Glenn Denton, bought the parcel of land sandwiched between oil fields and farms as an investment. 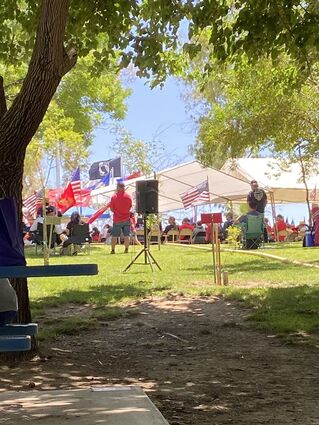 The shaded grounds were the site of the annual Memorial Day Service.

He had come to Bakersfield as a Marine recruiter, and would eventually make the city his home. But a promise to his comrades in the 1st Marine Division not to forget the 122 Marines killed during an eight-day battle in Vietnam's Khe Sanh Valley in the summer of '69 caused him to rethink his investment.

That parcel would eventually grow, develop and evolve to become Camp Hamilton: a playing field, park, shooting range and a memorial for veterans, a place where soldiers, sailors, airmen and Marines who served honorably are remembered.

To fight and die and be discarded from memory was not acceptable in Denton's view. He wanted to find a way to honor his fellow Marines and support his future brothers and sisters in arms. Ultimately, he named the park after his brother in arms, Leonard Hamilton.

"It's kind of an oasis in the oil field," he said.

There are now more than 300 trees planted as living memorials to those who served. It's also a place of support for current and recent servicemen and women.