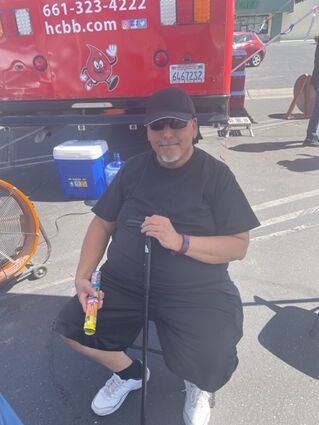 Jesus Aragon said he used to give blood before he got sick. His wife now donates to help others like him.

The Houchin Community Blood Bank bus was once again back in Wasco. It was a great turnout, with many Wasco residents donating. Those that came understood they were helping to save lives.

The event was in partnership with the Wasco Knights of Columbus; Pizza Factory and Iron Valley Fitness were sponsors.

The bus comes from Bakersfield every eight weeks, and the attendance gets bigger each time.

"We were happy with the large crowd that came to donate. Every time we partner with the Knights of Columbus, it is a big success," said HCBB Account Coordinator Stepanie Pimentel.

Mayor Gilberto Reyna of the Knights of Columbus said, "We have been doing this for the last 12 years."

The Knights of Columbus is a fraternal organization for Catholic men with a mission to serve those in need in the community. It has an almost 100-year legacy of playing a vital role in Wasco.

Together they promoted the event on social media, and the sponsors helped get the word out.

The process of donating involves a simple questionnaire and a brief health screen to confirm one is eligible. A person can give as young as age 16 with parental consent. There is no cutoff age.

"I tell people on the fence about donating not to be afraid because it is pretty easy, and honestly, I think it's fun," Pimentel said .

The staff is also bilingual to help non-English speakers. There was a team of six people running the event, including two phlebotomists, two screeners, a bus driver and a registrar.

Some donors have contributed greatly over the years.

"Today marks my six-gallon donation. I am motivated to be a donor because there is a shortage. My blood type is essential, so it works for everybody," said Danny Espitia.

Joe Dominguez said, "I am almost to five gallons."

"I came with my dad to give back to the community," said Alyssa Dominguez. "You might not know who you are saving, but you just know you are saving someone's life that needs blood. I am one pint away from two gallons."

Todd Hoisington, Jr. has donated 25 to 30 times. "I have been giving for seven years. I think it's important and like to help others."

There is a nationwide scarcity of blood. With the pandemic, there has been an even greater need.

Some had a special connection for their reasons for donating.

"My mom needed blood, and my cousin was in a bad accident, and I think it's good to give back to everybody that might need it," said Noe Ocampo.

Jesus Aragon came with his wife so she could give blood because he has a physical condition requiring blood.

"She often gives because she knows she is helping people like me plus other people need it more than me. If I could give, I would," Aragon said .

Katherine Deford, HCBB mobile supervisor, is in charge of all mobile units and monitors donor flow to ensure everyone has a good experience and that staff is efficiently getting donors in and out of the bus.

"I also educate donors if they have any questions. I am here to help," said Deford. "A lot of people think they can't donate when in reality they can." 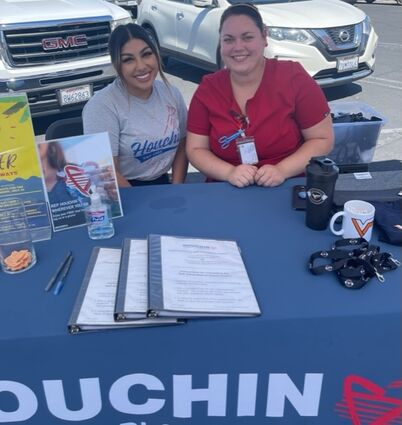 Stephanie Pimentel and Katherine Deford of HCBB were on hand to educate donors.

She complimented the city of Wasco, noting residents are always very welcoming. "We love coming out here."

"It is important to serve Wasco because it's a great community, and we do really well here," said Deford.

Each donation makes an impact.

"People should know that you are saving up to three lives with every donation. It makes a difference because blood donations have decreased, and we try to educate, especially the next generation of donors," Deford said.

For more information on when the bus is back in Wasco, visit their website at hcbb.com.