The Doctor is in the House at Ford Theater 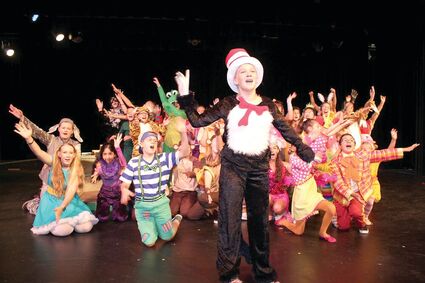 Bailee Payne as the Cat and the rest of the cast of Seussical.

The Shafter Children's Summer Theater will be bringing their production of "Seussical" to the Shafter Ford Theater July 29-31, with performances beginning at 7 p.m. on Friday and Saturday, and 4 p.m. on Sunday.

This year's production, a smash hit on Broadway,is based on the works of Theodore Geissl, Dr. Seuss. The story brings back popular Seuss characters, including The Cat in the Hat, Horton the Elephant, and JoJo, a little Who child. Other characters include Gertrude McFuzz and Lazy Mayzie.

Seussical weaves a story of friendship, loyalty and love.

The Cat in the Hat guides the audience into The Jungle of Nool to see Horton, the kind-hearted elephant who discovers a speck of dust containing Whoville. He meets JoJo, a Who child reprimanded for thinking too many "thinks." Horton decides he must protect the speck of dust on a nearby clover, while at the same time protecting an abandoned egg left to his care by the lazy Mayzie la Bird.

Horton tries to convince the other animals in The Jungle of the existence of the Whos, but he is ridiculed and put on trial for insanity. Only his loyal neighbor, Gertrude McFuzz, never loses faith in him.Despite all odds, Horton and Gertrude band together to save the Whos, free Horton, and restore peace and unity to the Jungle of Nool. Seussical JR teaches us the power of being unique, and the importance of fighting for your beliefs. 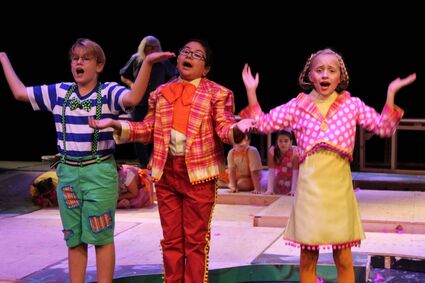 JoJo the Who, played by Micah Neufeld, with Mr. and Mrs. Mayor, played by Emma Gonzalez and Grace Givens.

New to the Children's Theater this year is the addition of the Rising Stars group. This group is made up of kindergarten children up to second graders, with music, dancing and acting designed just for them. This year, the Rising Stars program will open the show with their own featurette, which was written for them to match the Seussical fun of the Children's Theater.

The Shafter Children's Summer Theater is in its 27th year, with Cris Starrh creating the group as a way to give something for children to do during the summer and to be an outlet for their creativity.

Tickets are available online at shaftertheater.org.