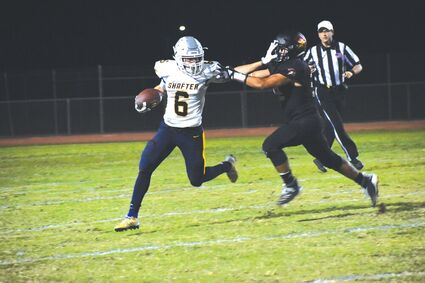 Jonathan Sanchez was a standout for the Shafter Generals football team.

First in a series on Shafter High alumni and their experiences after graduation.

Jackson Sanchez, a 2020 Shafter High graduate, is continuing his love affair with sports through the pen these days, writing his way to a major in journalism at Fresno State University.

Sanchez was a major contributor for the Shafter Generals on their way to the Valley Championship game against Bakersfield Christian High School in 2019. Sanchez did a little of everything for the Generals, receiving, quarterback and a monster defensive back.

Sanchez also excelled in the classroom, getting excellent grades and even being named the Young Person of the Year by the Shafter Chamber of Commerce at their annual awards banquet. Sanchez said at the time of the award that Shafter High School had a big part in his success, and the excellent teachers and staff were a great way to go through high school.

He attended and played football for Bakersfield College the year after he graduated, competing for the Renegades in the 2020 season.

Sanchez then decided to attend Fresno State, a school that is not too far away from home, but still on his own. "I didn't get any offers after Bakersfield College, so I decided to go to Fresno State instead of trying to continue to play at a Division III school that wouldn't be paying for any of the costs."

Jackson said that he wasn't sure what he was going to major in, but then thought that journalism would be a way to stay connected to the sports world. "I started the journalism major thinking that it would be a great way to still be involved in sports, but have really realized a passion for writing about all sorts of things." 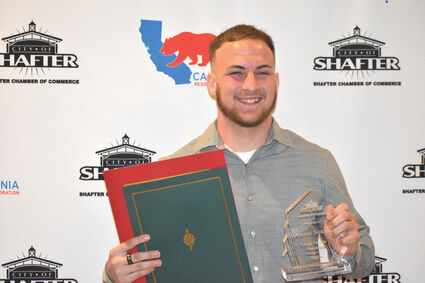 Jonathan Sanchez received the Young Person of the Year Award at the annual Chamber of Commerce Awards Banquet in 2020.

Sanchez said that he is getting a lot of his major courses out of the way this year, but hopes to intern at a local Fresno paper or the school paper next year. "Our journalism department is considered one of the top 20 schools in the state, so I am really happy that I decided to attend here."

Sanchez submitted an article on a local Shafter business to the Shafter Press and is actually starting a series for one of his classes on small businesses throughout Shafter.

Sanchez hopes to one day get into journalism professionally, either starting as a reporter, or his dream would be on the digital side, perhaps as a sports broadcaster.

Sanchez said that he really enjoys his time in Fresno. When he is not doing homework, he enjoys hanging out with his friends playing video games or other activities. "We have a sand volleyball court at the apartment complex I live at that we spend a lot of time at," Sanchez said. He also has some friends from Shafter that have a house nearby that he spends a lot of time at.