Generals even league record with win over Delano 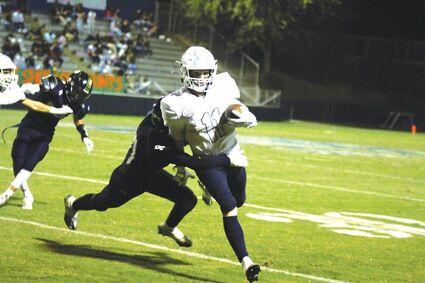 Koa Rhodes runs for a first down.

The Shafter High Generals evened their league record at 2-2 after a big win at Delano 56-14 on Friday night. In one of the most complete games of the season, the Generals had contributions by all phases of the game, including offense, defense and special teams.

Freshman quarterback Ezekiel Osborne had his most productive game, with over 300 yards passing. Osborne finished the game 14-18 passing, with six touchdowns. Osborne had a complete arsenal, with four receivers scoring touchdowns. Jesus Figueroa had four catches for 131 yards and two touchdowns to lead the Generals.

Shafter began the game with a score on their first possession of the game, when Osborne connected with Figueroa on a 12-yard score. Koa Rhodes, the dynamic running back for Shafter, who ended the game with 107 yards rushing, scored on Shafter's next possession, making the score 14-0.

The Generals were leading 21-7 late in the first half when it looked like the Tigers may be driving before halftime to close the gap. But, the Generals' defense got the ball back for Shafte r on a fumble recovery, and the Generals took advantage of the opportunity with another score to go up 28-7. This was a 40-yard touchdown pass from Osborne to Jesse Bernal.

In the second half, the Shafter defense kept the pressure on the Tigers and never let them get a rhythm in the game. The Generals' defense held Delano to 54 yards rushing and 137 yards passing for the game.

After halftime, Christopher Espinoza ate up a lot of yardage and time on the clock as he ground out over 100 yards rushing in the game, to complement Rhodes' performance. 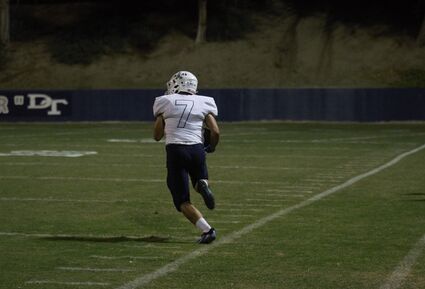 Jesus Figueroa races for a touchdown.

The Generals' offense ended the game with 201 yards on the ground and a whopping 323 yards in the air. Coach Jerald Pierucci said that this was the most complete game of the season for the squad. "The team finally played a complete game. Up to this point in the season, we had at the most played two good quarters of football. This game encompassed all three phases of the game."

Pierucci also said that seeing the team play well in all three phases against a good team, in a tough environment, was encouraging for where this team is going.

The Generals will have the week off this week, giving them some extra time to prepare for league favorite Kennedy High School. Shafter will host Kennedy on Friday night, Oct. 21. The junior varsity game will begin at 5 p.m., with the varsity kicking off at 7:30 p.m.