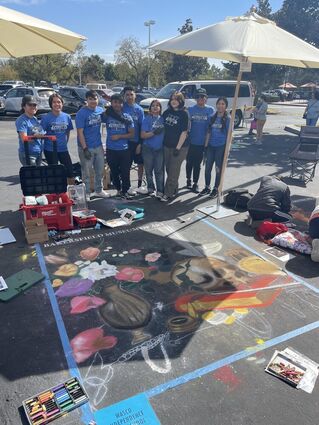 Students on a break to see the progress from a distance because their perception is incorrect when they are too close to the piece. From left are Monica Adams, Sara Adams, Ernesto Maldonado, Beto Carmona, D'Alessio Estrada, Naima Radillo, Alejandra Campos, Angie Benavidez and Samantha Gaitan.

"My art teacher at Wasco High, Mr. Art Sherwyn, took me years ago, and as a teacher, it was something I wanted to do with my students," Adams said.

Artists from all over the county used pastels to color the asphalt with images. Twenty local schools also attended the celebration.

Adams said that usually, the other schools bring out their art clubs.

This year's theme was Chiaroscuro which is the study of light and dark.

To prepare, WIHS students started the layout process in the classroom a week prior. They also completed a pastel project.

"We studied a technique which explores the balance of light and dark," Adams added.

They put that effort into creating an original 7ft by 7ft piece of art.

Students arrived at 8 am and worked until 2 pm when they finished their rendition of 'Still life with bouquet and skull' by the painter Adriaen van Utrecht.

"We were on our knees coloring and blending as we went from start to end time," Adams said.

The finished artwork was more like a traditional art piece based on the Baroque period.

Student Beto Carmona said it was a unique experience.

"You get to see the creativity from different schools. We also saw the more experienced artists, and that was inspirational."

He said it was his first year in art class and that he learned a great deal seeing the techniques from other students.

"I enjoyed being part of something so grand and hope to participate again next year."

Another student, Naima Radillo, said, "The best part was that I was able to spend time with my friends and meet new people."

Radillo added, "I thought it was a lot of fun doing something I love, and I got to put into practice everything I have learned in art class this year."

One of the goals for Adams was to introduce the students to other artists in the area.

"Sometimes students get caught up on what art is, and they don't realize the number of artists out there locally."

She said it was nice to see what the students produced and how they approached the pastels.

"Pastels are the medium we work with and is similar to chalk but deeper pigmented."

Adams stated that the message for the students was that anyone could be an artist.

"Everybody has that ability as long as it is something they continue to grow." 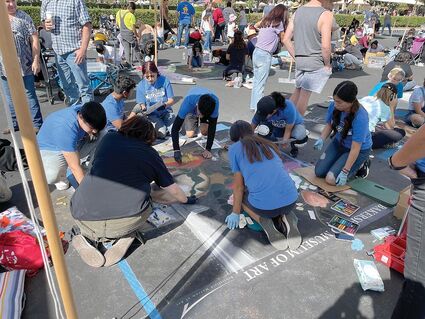 Students started working at 8:00 am and dedicated almost their whole Saturday to making art.

Their work serves to motivate the other students at the school.

"What I do afterward is put pictures up of their finished work to share with other students. They are impressed by how much they got done in a short period."

She added that it really lets them know they have the potential to realize whatever they put their minds to.

"The kids are usually pleasantly surprised when they see what other artists are doing, and when they are done, they have a sense of accomplishment," Adams said.

"We are very proud of them for the commitment and passion they put in and how well they represented our school."