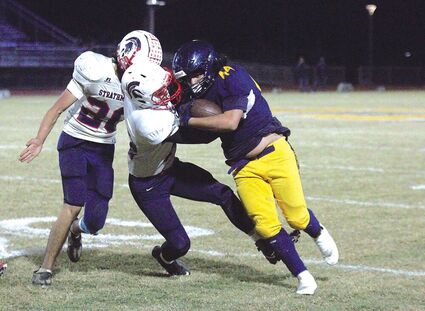 Christopher Espinoza runs over Spartan defenders for a first down.

The Shafter Generals earned a matchup with top seed Liberty-Madera with a victory over #9 seeded Strathmore on Friday night, 42-21. The win for the Generals, who came in seeded #8, was without running back Koa Rhodes, who was out with a knee injury suffered against Wasco.

Christopher Espinoza was up to the challenge and had an outstanding game for the Generals, chewing up yards on the ground, getting key first downs and a long touchdown run.

The start of the game was a boxing match, with the teams taking turns scoring. Strathmore got on the board first with a long pass play with just under four minutes gone in the game. Shafter answered back with a 68-yard touchdown pass from freshman quarterback Ezekiel Osborne to Jesus Figueroa.

The Spartans took the lead back with a short touchdown run. Figueroa was on the receiving end of another long pass play for a touchdown on Shafter's next offensive play, tying the score at 14-14.

Osborne ended the game with 230 passing yards and four touchdowns. The Generals took the lead when Espinoza ran up the middle and ran for a long touchdown run, putting the Generals up 21-14. The Generals' defense then stiffened up and didn't let the Spartans back in the end zone except once in the second half. 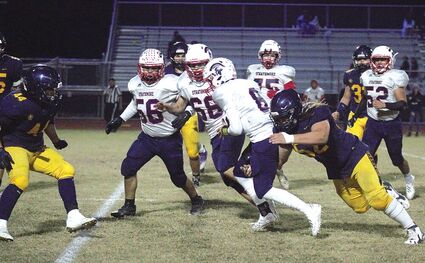 The Generals' Matthew Cordova stops the Spartan back from getting a first down.

The second half was filled with the Shafter offense chewing up yardage and time off the clock, with the ball spread around from several receivers, with Espinoza and running back Rafael Ramon-Amador gaining precious yardage and first downs on the ground.

The Generals put the game away late in the fourth quarter with a scoring pass to Maryon Sloane, giving the Generals a big lead. The game earned Osborne Player of the Week honors by FFX on the KGET high school sports show.

Osborne was 8-16 passing with four touchdowns and 230 yards. Figueroa and Sloan finished the game with two touchdowns apiece, with Espinoza picking up the other touchdown. The Shafter defense did a great job in the second half, keeping the Spartans' offense off of the field.

Shafter will travel to top-seeded Liberty-Madera on Thursday night for a 7 p.m. kickoff.