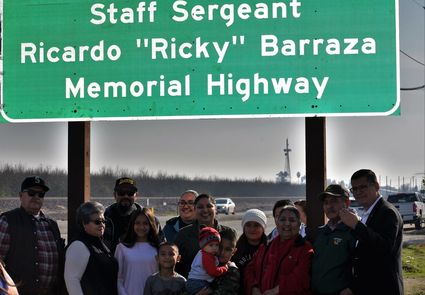 A dedication ceremony was held recently for a Shafter soldier who was killed in action in 2006.

A portion of Highway 43 is now known as Ricardo "Ricky" Barraza Memorial Highway in honor of the Shafter High graduate who gave his life for freedom and liberty.

A number of dignitaries were on hand to celebrate this occasion. Mayor Gilbert Alvarado was in attendance, as well as Assemblymember Rudy Salas, who were instrumental in the project coming to reality.

It started with retired Air Force veteran Mariana Solbolewski. She had read about Barraza's story and wondered if there had been any sort of memorial in his name. She found that there wasn't, and she contacted Alvarado. Alvarado and Salas Solbolewski met, and the dream was put into action.

Born May 31, 1981, Barraza was one of five children. He attended Shafter High School, where he excelled in athletics, playing basketball, football and track. After graduating in 1999, he enlisted in the Army and dedicated his life to serving his country.

Barraza achieved the position of squad leader and was assigned to 2nd Battalion, 75th Ranger Regiment, Fort Lewis, Wash. Barraza was a six-time veteran of the global war on terrorism, deploying three times in support of Operation Enduring Freedom in Afghanistan and was on his third deployment in support of Iraqi Freedom. He was killed by small-arms fire March 18, 2006 in western Iraq at age 24. 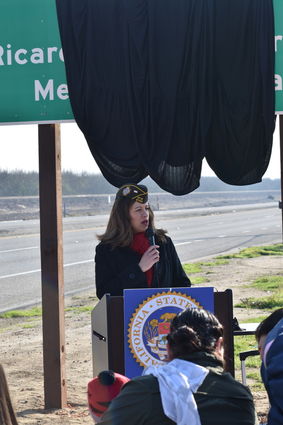 Mariana Solbolewski says some words about the journey to this point, dedicating this portion of highway in honor of Ricky.

The Barraza family, led by mother Nina Barraza, are very honored for this gesture and were in attendance for the unveiling. Nina Barraza said, "I am so grateful for the communities of Shafter and Wasco, and for Mariana, Rudy and Gilbert for doing this in honor of my son," she said.

"I think that this is the best Christmas present that I could ask for. This is not just for Ricky, or me, but it is for my grandchildren, and even their children. Every time they pass that sign, they can think of Ricky."