New mayor to give first State of City 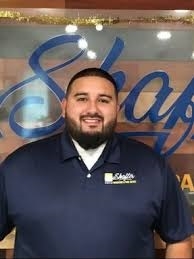 Phillip Jimenez is the district manager for the Shafter Recreation and Parks District.

The Shafter Chamber of Commerce is holding the 71st Annual Community Awards Banquet on Thursday, Jan. 24 at Shafter's Ford Theater. The event honors local businesses and individuals who have made a difference in the community.

Two of this year's award winners are Phillip Jimenez and Joanne Carrillo.

Jimenez is receiving the Community Service Award. Jimenez is the district manager of the Shafter Recreation and Parks District. He's a hometown boy who graduated from SHS in 2007 and went to Southern Utah to play football. Jimenez came back to Shafter the next year and ended up spending the next two years at Cuesta College and playing on their basketball team, which won two straight conference championships.

In 2012 Jimenez was at work in Shafter and got a call from the football coach at Tabor College in Kansas. Jimenez went to Tabor to play football and got his degree from Tabor.

Phillip went to work for the Shafter Recreation and Parks District in 2014 as a sports specialist. Just a few months later, he became the interim program coordinator. Jimenez was named the district manager in 2017.

Jimenez has a long history of sports involvement, especially with the youth in Shafter. Even in high school, Jimenez officiated soccer and basketball games for the youth sports leagues. Jimenez is honored by the award and loves the community of Shafter and its youth.

Joanne Carrillo is a retired teacher in Shafter and is receiving the Education Award this year. Carrillo started teaching for the Richland School District in 1984. Joanne taught kindergarten in the beginning, and also taught first and second grades at Golden Oak Elementary, which at the time was called Richland Primary School. Carrillo enjoyed teaching and making a difference in the lives of her students and the community. "Being a teacher is a rewarding and challenging occupation. You can make such a difference in not only a student's life, but in the entire family's life."

Carrillo went on to teach higher grade levels at Richland Elementary, which is now Redwood Elementary. Joanne retired in 2017. Carrillo is now working as a consultant for the district.

Carrillo said that she was called to do research on starting a dual immersion program in Shafter. Carrillo did the leg work on the project and has been instrumental in getting the program started at Golden Oak Elementary, set to start in August.

"I think that this program will help not only English learners to improve and excel, but also English speakers who benefit from the program with the ability to function in the classroom and the workplace being bilingual," Carrillo said.

Carrillo was surprised by the announcement of her receiving the award and is humbled and honored by the gesture. The awards banquet will begin at 5:30 p.m., with an hors d'oeuvre hour and dinner before the awards will be given out. There also will be a State of the City address by Mayor Gilbert Alvarado.