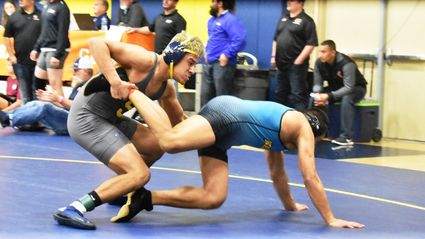 Rafael Zamudio gets a take down for two points.

At least three Shafter High Generals wrestlers will be in action for another week as they moved forward to qualify for the Masters tournament.

Coach Rick Gabin and the Generals came into the Central Section Division II tournament with a full slate of wrestlers looking to make it through to Lemoore. Shafter had several grapplers who placed in the league tournament, giving them the chance to move on to the Division II championships.

For the second consecutive year, Shafter High was the site for the tournament that serves as a qualifier for the Masters tournament Feb. 15-16 at Lemoore High School. The top placer at the divisional tournament was Rafael Zamudio, competing in the 170 lb. class. Zamudio went 1-1 on Friday, allowing him to move on to Saturday. He then opened the final day with a pin against Juan Perez of Corcoran

Zamudio got another pin in his next match against Sebastian Romero of Exeter. Zamudio just missed a spot in the semifinals with a loss to Juan Alonso of Kennedy High School. Rafael then took on Alfred Carpenter of Kingsburg in the 5th place match. Zamudio made short work of Carpenter, getting a pin in the first period, capturing the 5th place medal and a trip to the Masters.

In the 120 lb. class, junior Christian Garza took 7th place. Garza opened up the tournament with a 1-1 record on Friday. On Saturday, Garza pinned Victor Rojas of Liberty High School. Christain then lost his match with Andy Ojeda of Pioneer Valley by pin. Wrestling for a spot in the Masters tournament, Garza then pinned Andrew Alejo of Kerman, stamping his ticket to Lemoore. 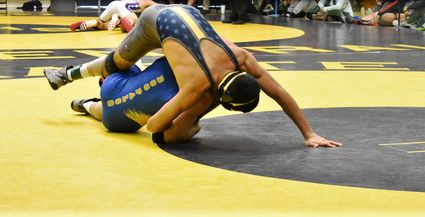 Fernando Carreno got a pin, assuring his place in Lemoore.

Nate Gonzalez was the third Shafter High wrestler to earn his spot in the Masters tournament. Gonzalez also went 1-1 on Friday. On Saturday, Nate got a pin against Nick Morales of Sanger High School. Gonzalez then lost to Eric Vera of Pioneer Valley, knocking him into the consolation round against Dawson Hubert of Hanford. Nate pinned Hubert, setting up a match against Cal Muxlow of Kingsburg. Dropping the match to Muxlow, Gonzalez went up against Oscar Perez of Kennedy High School for 7th place. Gonzalez defaulted the match, ending the tournament in 8th place, also earning him a spot in Lemoore.

There are also three additional wrestlers from Shafter who will be making the trip to Lemoore. Fernando Carreno, Conner Rubalcado and Richard Herrera all finished in 9th place in their weight divisions, making them alternates, allowing them to compete if any of the top eight wrestlers are unable to compete.