Arts festival all over town 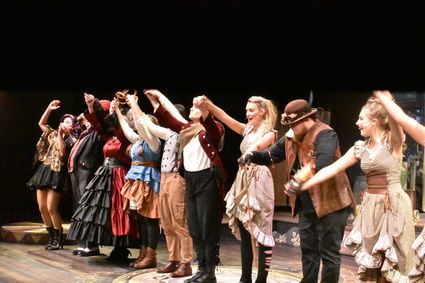 The City of Shafter was the place to be last weekend for arts enthusiasts.

On Saturday, the day started early when participants gathered for the annual Colours Fun Run and Walk. The course started at Shafter High School and went out into the orchards, with several stations along the way where the participants would get doused with blasts of color. By the finish line, everyone displayed a rainbow of colors on their shirts, hair, face and even their pets.

For the car enthusiasts, a car show was held on the south end of Mannel Park. Classic hot rods mingled with tricked out pickups and speedsters. The Shafter High School Jazz Band was on hand to entertain the music lovers in the crowd. Music Director Phillip Bustamante led the ensemble through a set of classics, from swing band tunes to oldies.

Chili was on the menu at the park as the Annual Chili Cookoff was held. There were competitors in different categories, with entries ranging from mild to super hot. Team Scooter, headed up by City Manager Scott Hurlbert, returned to the event with their recipe, designated on the hot side of the scale. There were several varieties that suited whatever your every taste.

With the music, chili and cars, it was a satisfying afternoon at the park. "Every year I like to come to the park to listen to some great music, sample some good chili and this year they had the awesome cars down here. It was a blast," said Michael Latham. "I actually live in Bakersfield, but I love coming to Shafter for this event. It is neat having so many things to do all in one place."

For those looking to entertain their children over the weekend, the Children's Art Workshop was held at the Shafter Youth Center. Kids had the chance to get some hands-on assistance, letting them create a work of art that they could take home to their families. Artist Nicole St. John helped the children bring their vision to the canvas. The works were then put on display for all attendees to see.

Randel McGee and Groark returned to Shafter this year and played to a packed house at the Church of Christ on Saturday afternoon. McGee is an internationally known puppeteer that has been entertaining audiences throughout the world. McGee is also the recipient of the Citation for Outstanding Achievement in the Art of Puppetry Award, which was founded by Muppets creator Jim Henson.

McGee uses a mix of stand-up comedy, witty banter, original songs and hilarious storytelling to appeal to young and old alike. For high school and adult film enthusiasts who would rather be part of the action than watching it, there was the Film Making Experience held at the Police Department meeting room. The workshop gave attendees the chance to learn what it takes to make a movie. Participants learned how to work a dolly, lighting, casting, editing and lighting. The workshop was put on by the Christian Youth Film Society. It was a hands-on experience in movie making. 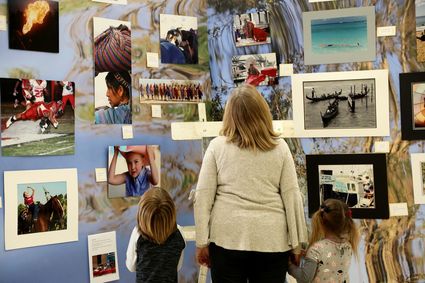 Colleen Diltz had a collection of photos from her travels on display.

This year, the Meet the Author event was held at the Shafter Learning Center and featured local historian Stan Wilson. Wilson gave an informational and entertaining presentation about the life and history of Shafter's namesake, General William Shafter. Wilson told of how the general, who had virtually no military experience, led his troops and became one of the main contributors to the nation's military history.

With the weekend full of events, there was something for just about any interest and taste. The success of the Festival depends on the support of the attendees and the hard work and dedication of community volunteers. Attendee Carol Lithrop commented, "It is kind of sad to see the arts kind of fading in today's world. Things like this weekend give people a chance to see so many kinds of art that we might not have anywhere else."