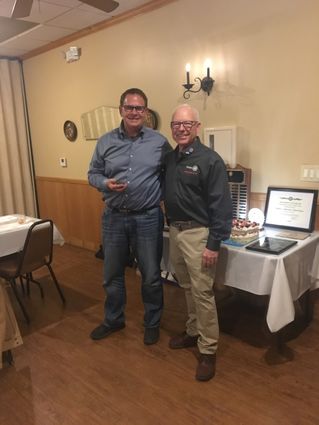 The Shafter Rotary Club celebrated their 80th year in existence recently with a special event held at Benji's Basque Restaurant in Bakersfield.

President Garry Nelson led the proceedings that included dinner, speeches by Nelson and fellow members of the club, and a special presentation that included giving three members their Paul Harris Fellow awards.

The Shafter organization began in 1939. The club has had its ups and downs, but the constant has been the outstanding service that the club has done for the city, especially when it comes to the youth of the area.

One main project the club has is sponsoring students every year at the Rotary Youth Leadership Awards, a conference that is held for high school students who spend a week learning leadership skills, team-building and having life-changing experiences that help mold them into the leaders of tomorrow. The Rotary also gives money and time to a number of schools in the area, as well as local scouts, youth groups and businesses that are working to make Shafter a better place to live.

The world's first service club was the Rotary Club of Chicago, founded in 1905 by Paul Harris and three of his friends. The name Rotary was derived from the early practice of rotating meetings among the members' offices.

Today Rotary is a growing organization of well over a million volunteer business and professional men and women worldwide. The organization provides humanitarian service, encourages high ethical standards in all vocations and helps build universal peace and growth, following their motto, "Service Above Self." 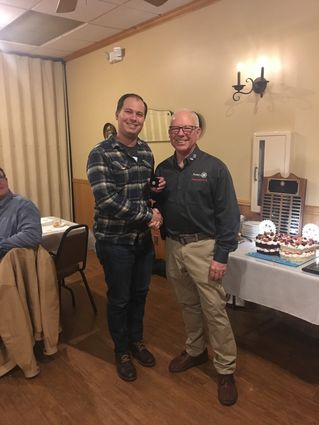 Blake Goehring was another recipient of the prestigious award.

Three Shafter Rotary members received the Paul Harris Fellow Award and Service Awards. The Fellow award is given to a member who has contributed over $1,000 in their name to the Rotary Foundation. Blake Goehring, Clark Goehring and Del Garcia all received their awards in recognition of their accomplishments. Each member has attained the level of a Paul Harris Fellow, giving them the distinction of having their names added to the growing list of outstanding individuals here..

Their awards were given to them by club President Garry Nelson.

Club members are involved in numerous activities and events throughout the year that enrich the youth and community of Shafter. Currently, they are sponsoring a young lady in the Distinguished Young Woman of Shafter program, which they do annually, among their many other projects.

The club meets every Wednesday morning at the Shafter Veterans Hall.