Kudos for lifesavers at council meeting 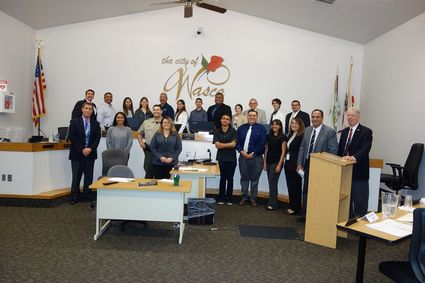 Mayor Gilbert Alvarado presents a certificate to Sergeant Lionel Lopez for his being named Volunteer of the Year for the local VFW Post.

On a night that saw a light agenda, the City of Shafter honored those who save lives, in many forms, from first responders to organ donors.

Mayor Gilbert Alvarado presented Sergeant Lionel Lopez with a certificate recognizing his contributions to the city and being named Volunteer of the Year by the local VFW post.

Sergeant Lopez has been donating his time to the VFW for the past three years. Lopez works at the annual pancake breakfasts and a variety of fundraisers they hold throughout the year. Lopez has been with the department since February 2000

He was given his award recently by VFW President Danny Rueda and Rep. T.J. Cox. Sergeant Lopez was commended for his strong sense of duty, tenacity, endurance and professional skill that sets the standard for others who work near him.

Shafter Police Officer Jeffrey McCuan was recognized for his service above and beyond what is required as he showed compassion and caring as he helped a Shafter woman through a very trying time.

Officer McCuan was dispatched to assist at the home of Elizabeth Davis. Officer McCuan responded to the scene and ultimately discovered Davis unresponsive. Segeant Mora of the SPD initiated CPR until medical personnel arrived. It was determined that Davis was deceased. 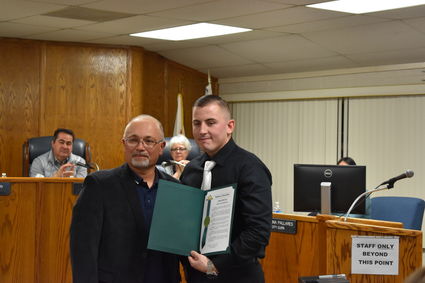 Officer Jeffrey McCuan was honored for his going above and beyond his duty as he comforted a daughter whose mother had just passed away until family members could arrive.

The city also recognized a lifesaver in a different form as they proclaimed April DonateLife month. Christine Wilson, former city clerk, was there to accept the proclamation on behalf of DonateLife.org. This organization works to have individuals say yes when filling out the donor information on their drivers licenses and ID cards.

Wilson said that there are over 350 individuals waiting for organs and tissue for transplant in Kern County alone. Wilson herself donated a kidney to a woman in Wasco, Michelle Hernandez, who was present at the meeting, giving her a new life free of dialysis. Wilson encourage all of the people in attendance to think about making this effort to save a person's life.