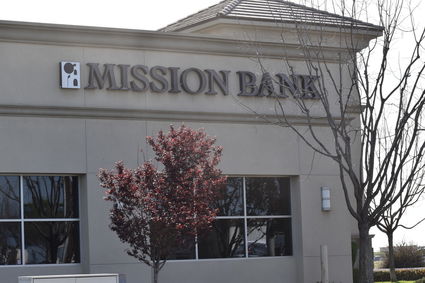 Mission Bank's home on Lerdo Highway at the edge of town.

Mission Bank, the only locally owned bank serving customers in the Shafter-Wasco area, started here in 2006 out of a trailer before they could even put up a building.

In 2008, they moved into their permanent location on Lerdo Highway. Mission Bank has added several locations since then, including one in the High Desert and in Stockton. Even with the growth experienced by the institution, they still aim to give that small-town service that only a locally owned bank can give.

The local branch, while well-known for their commercial and agricultural services, offers a full range of services for personal accounts as well.

The bank opened its first office in downtown Bakersfield in 1998, focusing on the local businesses and their needs, building relationships with customers and their needs.

Under the direction of President Richard Fanucchi, Mission put down strong roots in the community. They opened a second office in Greenfield, and then their vision, which is "to become the business community's bank of choice in Kern County," led them to open an office in Shafter.

Mission Bank's solid financial position allowed them to weather the financial crisis of 2008-2009 with positive earnings and without any government assistance. While a lot of banks were closing or struggling, Mission Bank actually grew.

A large part of their success is their reputation and personal customer service. In fact, every April, the bank in Shafter has a barbecue on Customer Appreciation Day, named in honor of a longtime employee and Shafter resident who passed away, Judy Hopkins.

Hopkins was an essential part of the Mission Bank team when they opened in Shafter, having a good customer base that Hopkins had built here in her many years of banking. "In the beginning, Judy was a great help, assisting the bank in its growth and its building of a strong customer base," Wilson said.

In 2011, A.J. Antongiovanni was appointed president of the bank. With Antongiovanni at the helm, the bank has continued to grow and expand.

Mission Bank keeps growing bigger and stronger without forgetting about why they have that success. They value their customers and realize that the outstanding achievements they have accomplished could not have been so without their loyal customers.