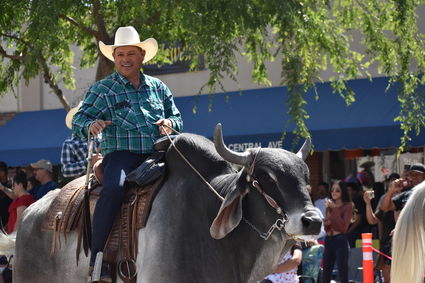 An appropriately dressed rider in the parade.

For the 28th straight year, the City of Shafter celebrated the first Saturday in May with a Cinco de Mayo Festival, honoring the Mexican Army's victory over the French in 1892. The festival was the brainchild of the late Albert "Roy" Root, husband of Deanna Rodriguez-Root.

Roy and Deanna started the celebration to bring the community together in a cultural event that transcends race, economic status and social standing.

This year, Deanna and her daughter, Brandi Roor, instead of spending Saturday at Mannel Park, overseeing the activities there, they were doing double duty as they served as the Grand Marshals for the festivities. Thanks to a great number of volunteers and staff, the events went off without a hitch, easing their minds as they enjoyed their time in the spotlight.

"We had been approached before about being grand marshals, but we just didn't think it would look good for us to have that title, but this year, they didn't give us a choice, naming us the Grand Marshals if we wanted it or not," said Rodriguez-Root. "We are so honored to have them give us this nod. It is really a testament to the great bunch of people we have on the committee that we can relax and enjoy this day without the worry of something going wrong. We have so many wonderful people working with us."

The big day started with the parade going downtown, heading down James Street and turning onto Central Avenue at the judging stand. The parade included over 60 entries.

There were clubs, such as the Shafter Boxing Club, led by Mike Ayon, who gave the attendees a taste of the boxing that they would be treated to at Mannel Park. Planet Dance was also on hand, showing off their award-winning troupe that has dancers from all of the genres including jazz, tap, ballet and hip-hop. The team has won a national title and are looking to repeat this year in Las Vegas.

There were also local bands in the parade, with the Richland Junior High Trojan band and the Shafter High Generals, sporting their new uniforms. Showing that age is just a number, the Shafter Walker Senior Center had an entry in the parade with a group of ladies showing off their dance skills as they made their way down Central Avenue. There were plenty of cars in the parade, including low riders, classic cars, and tricked out modern vehicles.

Of course, the Cinco de Mayo parade wouldn't be complete without the horses closing out the show. The equine entries pranced, strutted and high stepped it down the street to the delight of the crowd.

After the parade, the fun moved to Mannel Park where dozens of vendors were there selling their wares, as well as over a dozen food vendors offering a great variety of meals to choose from, be it tacos, burritos or tortas, to pizza, corn dogs and burgers. 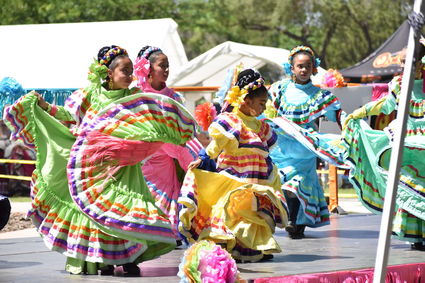 There was plenty for the kids to do, with games, rides, and shows on display. The Shafter Boxing Club put on exhibition matches, showing off their skills that have brought several national titles back to Shafter.

The events of the day serve as a celebration for the victory over a century ago, but it also serves as a family reunion for a lot of families in the area. "A lot of people plan on meeting at the park and downtown to have a sort of reunion. Some of them look forward to this event all year," added Rodriguez-Root. "We have people travel from all over Kern County, the state, and even as far away as Arizona and Nevada." Root said.