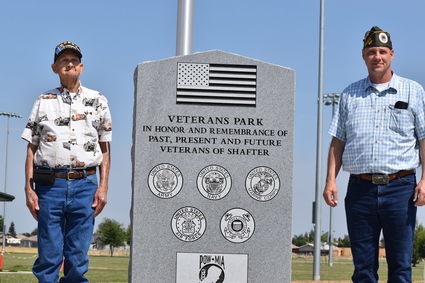 Veteran James Holt and Mike Miller of Am Vets unveil the memorial.

A memorial was unveiled at Veterans Park on Saturday morning during a dedication ceremony held to honor veterans from all branches of the military.

According to Mayor Gilbert Alvarado, back in 2008 when the park was being constructed, there was word that the park was going to be named after Staff Sergeant Ricky Barraza, a Shafter graduate who lost his life in the line of duty. But, it was ultimately decided to name the park Veterans Park, honoring all local veterans.

The Shafter Police Honor Guard presented the colors for the event, with Youth Pastor and City Council member Chad Givens giving the invocation.

The memorial is a stone plaque that has all of the branches of the military represented. Around the memorial, there is a circular concrete area with plants surrounding it. There are also three flagpoles that fly the U.S. flag, as well as the California state flag and the POW flag.

Michael James, Shafter's public works director, was master of ceremonies for the event and welcomed residents and local dignitaries, as well as Supervisor David Couch of the 4th District and representatives of local politicians including Senator Shannon Groves and Congressman TJ Cox.

James thanked all who were involved in the creation and installation of the memorial, including Steven Payne Construction, the Shafter Rotary Club, the City of Shafter and Amvets. 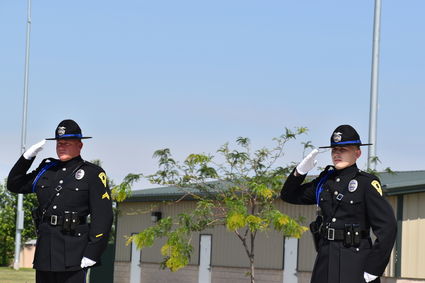 The Shafter Police Honor Guard salute during the National Anthem

Mike Miller from Amvets was there to speak on behalf of the Amvets organization. Amvets was started during World War I and was for members of the military who had fought in the war. As time went on, the organization was opened up to all veterans. Miller also said, "We are proud to be a part of this event and being involved in this special memorial. We also are welcoming any younger men and women who would like to become a part of the organization, helping with events such as this and honoring those who make it possible for all of us to have the freedoms that we enjoy every day."

James said that the memorial is more than just a piece of stone with writing on it. "This is a place where fathers, grandfathers and brothers can bring their children, grandchildren and other family members and tell them of what heroes are, and regale them with their experiences of serving their country."