Generals move on up 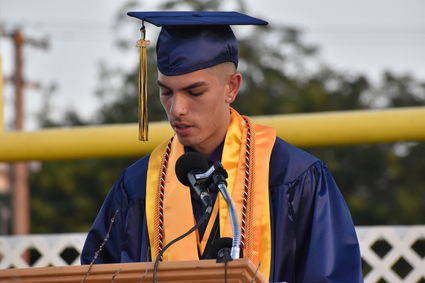 As the Shafter High Band played "Pomp and Circumstances" Wednesday night, 347 seniors, led by honorary flower girls, paraded across the stage to collect their diplomas. Principal Russell Shipley gave each graduate his or her diploma, ending their high school careers and sending them on to the next segment of their lives.

Senior Class President Juan Espinoza welcomed the parents, friends and family to the proceedings and gave the first speech of the evening. Espinoza thanked his fellow students, teachers and especially his family for helping him throughout his high school career.

"My family, at the end of the day, was the glue that kept me together," he said. "They kept me from falling apart in times of need." Espinoza went on to say that he thought, without a doubt, that in the crowd lies the future. "Seated before me are tomorrow's engineers, doctors, teachers, military personnel, and everything in between."

Alyssa Perez mentioned in her speech the time just four short years ago when she and her classmates entered the halls of Shafter High as nervous freshmen with highest of expectations, not knowing what the next chapter held. "As the pages kept turning, day by day, month by month, and year by year, we always knew that this day would eventually come, sitting side by side, in cap and gowns, walking across the stage and receiving our diplomas, showcasing all of our hard work."

She said she is beyond grateful to the wonderful Shafter High staff. "They not only cared about us inside the classroom, but also cared for us outside of it as well," she said. "Over the years, we grew closer to them, admired them, and most importantly, learned from them.

The final student speaker of the night was Alex Aguilar, who thanked the entire community of Shafter for their support and said he hopes to someday return and give back. "I say thank you to all of the coaches for dedicating time out of their lives to us," he said. "Also, to all of the teachers here on campus for taking their jobs one step further by getting to know us on a personal level as well."

Several awards were handed out as the administration recognized the top four placers in the class. Out of the four placers, there were a total of 10 students awarded. Tied for fourth place in the class were twin brothers Willem and Zebulon Waterhouse, with GPAs of 4.378. Hugo Perez was awarded for having the third highest GPA in the class with a 4.40. The Salutatorian Award, given to the student with the second-highest GPA in the class, was received by Ezekiel Mendez, who ended his high school career with a 4.412 GPA.

Principal Shipley then announced that there was an unprecedented situation at the top of the class. "For the first time in school history, we have an incredible six students who earned a perfect 4.5 GPA, tying for first place in the class." 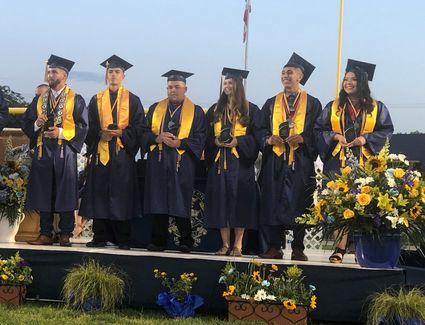 "I am so proud of this class for their achievements and am looking forward to seeing what the future holds for them," Shipley said.

Cynthia Brakeman of the Kern High School District Board of Trustees congratulated the graduates and accepted the class. It was then time for the graduates to make that final walk across the stage, the culmination of four years of hard work. They then walked out of the stadium for the first time as Shafter High alumni.