Nothing little about city's Free Libraries

Dreams of expansion for literacy efforts 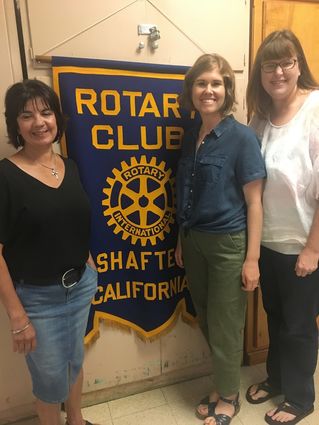 The Shafter Rotary Club hosted a couple of stewards of the Little Free Libraries here in Shafter. Katie Wiebe and Melissa Bergen spoke at a recent Rotary meeting telling the members of the importance of the libraries and the contributions that the project has made in its brief history.

Wiebe has had a library at her residence for several years, and one amusing story that was uplifting was published in the Shafter Press not long ago. Wiebe told the gathering that a small boy had been locked out of his house and went to her house for help because his mom had told him to go to the house with the little library in front in case of an emergency. Everything turned out fine, showing that the little libraries are more than just a little box full of books.

"If the libraries were just about books, that would be enough for me, but the reality is, they are about so much more," Wiebe said,

She related that one of the goals for the organization is to work with the City of Shafter to increase the scope of the project and the efficiency with which books are distributed. They also are planning to have a plan in place that will have a calendar of regular days and times for pick up in the city, and are aiming to add libraries in places that really need them, such as the Migrant Camp in Shafter, areas around Redwood, Golden Oak and Richland schools, and maybe the laundromat.

They are working to collect data on the LFL network, including how many people use the libraries and how many books are moving through the community because of them. They are already aware of students at Grimmway who say that most of them get books from the libraries and love the convenience of them and the selection of books.

Melissa Bergen said that the libraries are instrumental in helping the goal of the city to improve the reading the proficiency of the students here in Shafter and getting them on a right path at a young age.

"It is important to know that studies have shown that two thirds of students who do not read proficiently by the end of the fourth grade will end up in jail or on welfare. It also states that 85 percent of all juveniles who interface with the juvenile court system are functionally illiterate," said Bergen.

Bergen went on to say that literacy is learned. She also said that people in prison have significantly lower levels of literacy than nonimprisoned individuals. This shows who is most vulnerable to incarceration. Those without access to jobs or quality education fill jail cells, while those with a larger share of the nation's resources have a far greater chance to avoid incarceration. "Our local economy needs a prepared, educated workforce to draw new businesses to our area and to keep pace with new technology."

Bergen read a statement from Bethany Neufeld about her experience with the libraries. "My teachers made me read books I didn't like, so I thought that I didn't like reading. But then I found the book Eragon in a LFL, and I loved it! After I finished reading it I went to the library to find more books in the series and then when I finished that, I realized that I liked fantasy books, so I started reading those, and now I love reading!" said Neufeld.

Bergen concluded with, "The City of Shafter knows these statistics and is committed to investing in education that will help curb many of those problems. I am so proud to live and pay taxes in a city that is forward-thinking about trying to address and solve community issues at a foundational level. On a larger scale, the city is looking into expanding the Shafter Library/Learning Center, which would provide an increase in educational resources."