Review of city charter on track 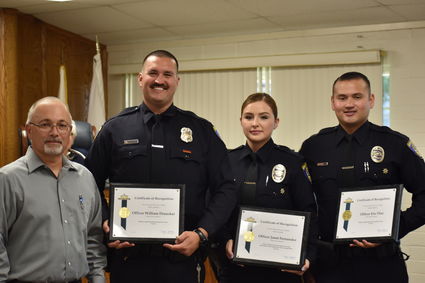 Officers Janet Fernandez, Eric Diaz and William Draucker were recognized for their awards given by Mothers Against Drunk Drivers.

The study session is going to be scheduled at the council's earliest convenience, preferably before the end of the month, according to Mayor Alvarado. The council approved expenditures up to $7,500 to retain Special Counsel Donald M. Davis, of the law firm of Burke, Williams & Sorenson, plus expenses.

Burke, Williams had provided a proposal to participate in providing an analysis evaluating if the city should remain a "charter city" versus becoming a general law city, which is what most Califironia cities are. The firm also would provide an analysis of the pros and cons of having a city attorney directly hired by the City Council.

Burke, Williams, with offices throughout the state, represents several water storage districts, and current City Attorney Steven Deitsch said he was very familiar with the firm, that they are "friendly competitors," and that they are "an excellent firm."

Burke, Williams also will provide an analysis of any other subject matter areas of the city charter that may be of concern or interest to the City Council following the workshop and detail the process for making changes.

Under Shafter's charter, the city attorney is a department head reporting to, and hired by, the city manager.

At their June meeting, the council approve a charter city workshop to be conducted and be attended by a third-party attorney of Mayor Alvarado's choosing.

A couple of citizens stood up during this time to speak to the council. Woody Colvard, a former City Council member and a member of the committee that helped create the city charter in 1993, asked the council what problem they had with the charter and why they had such an urgency to hold the workshop.

"The charter is scheduled to be reviewed, as specified in the charter, after the census, which will take place in 2020. What is the urgency to get it done now?," Colvard asked. Former Mayor Fran Florez posed the same question, wanting to know why there was a rush to get this done. Councilmember Manuel Garcia responded: "I am not in a big rush for this. It could be done in August or September; we just need to have it done."

More examples of the continuing polarization of the council and city officials were included in the discussion.

City Manager Scott Hurlbert asked for clarification on what was being voted on and Mayor Alvarado said, "We want to understand the charter. What is so hard to understand about that, Scott?" Hurlbert explained that the scope of the proposal brought before the council that was prepared by Burke was broader than what was discussed at the last meeting. He said that the proposal goes into listing pros and cons of being a charter city, as well as providing guidance on procedures that need to be done in the event that parts of the charter need to be amended or changed.

Councilmember Prout spoke to the Council. "I have not contributed in the last six or seven months. This is because every time I try to speak, I am shut down."

She then went on to say that in years past, discussions were had between the councilmembers, with compromises made and unity the result. "Now, there is division in the council. The city sees this division, and it has even been reported on in the newspaper. I am embarrassed."

She commented on Mayor Pro-Tem Cesar Lopez' reaction to her comments.

"Why are you smiling Cesar?," Prout asked

"I can smile all day long, Cathy," he responded.

Prout also commented that councilmembers were not willing to spend money to participate in a team-building exercise, but are willing to spend thousands of dollars to bring in a third-party attorney in for a work session without all of the council knowing what the goals and intentions are. Mayor Alvarado then made a motion to approve the expense of the third-party counsel to participate in the workshop, and the council approved it, 3-2, with Mayor Alvarado, Mayor Pro-Tem Lopez and Councilmember Garcia voting yes and Council members Givens and Prout voting no – the same split as other votes on the subject.

[BOX} Four extensions of time were granted for housing tracts in the City of Shafter. In two of the decisions, council members were required to recuse themselves due to possible conflicts of interest. In the first instance, an extension was requested for a tract on the north side of West Tulare Avenue, west of Vera Cruz Way. Mayor Pro-Tem Lopez asked the representative from the owners of the tract if they could be guaranteed that the land would not be sitting around unused two years from now, if they are granted the extension. Lopez mentioned that he lived across from the property, and it was an eyesore. Councilmember Garcia then said, "I don't want to be sitting here a year or two from now with nothing being done.

City Attorney Stephen Deitsch then asked Lopez if he indeed lived across from the property, within 500 feet of the property in question. He also asked Garcia if he did the same. Garcia said that he did not live in the area. Deitsch then asked if he owned property within 500 feet of the property. It was determined that he did, so Deitsch said that neither one of them should be able to take part in any discussion or vote on this matter. Lopez and Garcia were then asked to remove themselves from the chambers until the matter had been voted on. It was a 3-0 vote in favor of granting the two-year extension to the owners of the property.

[BOX} Three Shafter Police Department Officers were recognized for receiving awards from Mothers Against Drunk Driving recently. Officers Eric Diaz and William Draucker were honored for making seven drunk driving arrests, while Officer Janet Fernandez was the top officer in the department, with nine arrests. Members of the council thanked the officers for their service., and for getting dangerous drivers off the street.