Kids learn about patriotism at SYC 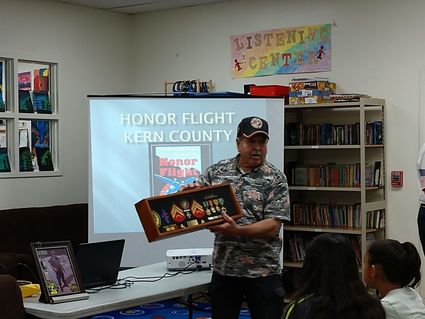 The Shafter Youth Center program, sponsored by Community Action Partnership of Kern, played host to a number of guests last week as they celebrated Patriot Week.

Director Angie Nelson said that the kids had a lot of fun learning about patriotism. "We had several guest speakers that showed the kids what being patriot is all about."

Santos Martinez, of Richland Chevrolet and a U.S. veteran, came and spoke about the Honor Flight of Kern County. Martinez told the kids that the organization gave veterans a chance to fly back to Washington, D.C. to see all of the monuments honoring the veterans, as well as meet our local politicians who have offices in the nation's capitol.

Martinez said that it is an honor to take the trip, and that the veterans are treated like heroes the entire time they are on the trip, from the actual flight to the special dinner that is put on for the honorees. He said that it is memorable to see the monuments depicting the conflicts that each military branch was involved in and the big walls that list the veterans' names on them.

Shafter Mayor Gilbert Alvarado spoke to the kids about what it is like to help run the city and all the work that goes into it. He explained that it takes a team that works together to make the city run efficiently, and Shafter has a great staff and leadership that helps it keep growing.

Being a patriot comes in many different forms and all of them are important, no matter what your position, he said. 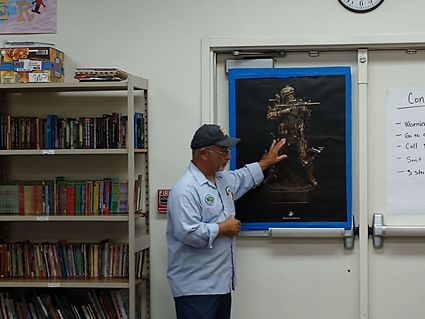 Mayor Gilbert Alvarado speaks to kids about being patriotic.

Fourth District Supervisor David Couch visited the kids during the week and told them that Kern County, including Shafter, is a model of patriotism in the way they recognize those who fight for the country, as well as the people who make our county such a great place to live. Patriotism is everywhere, in everyday people who have served our country, to those of us who work hard to make our cities places that thrive and prosper in challenging times. This time of year, patriotism is on a lot of peoples' minds, and the importance of recognizing those patriots gives everyone a chance to see that every one of us can be patriotic.

A representative from TJ Cox's office rounded out Patriot Week, telling the kids how important it is to honor those who are patriots, as well as being patriotic ourselves.

The kids learned that there are several ways someone can show their patriotism, from saluting the flag as it comes down the street, to helping America in your own way to give all of its residents the chance to be free. They learned that being a patriot is not just for those in power, or fighting in the military, but is something everyone can be.