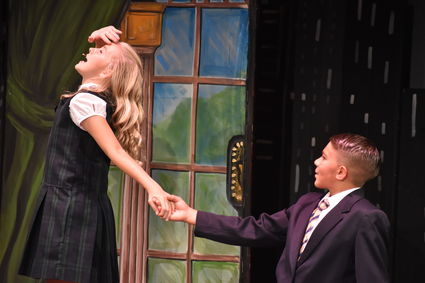 The Shafter Children’s Summer Theater celebrated their 24th year with a presentation of “Annie Jr.,” which showcased the talent in the area as the kids sang and danced their way through a very challenging score.

Most know the story of the little orphan in search of her real parents. Annie, played by Megan Bloemhof, goes in search of them after escaping from the orphanage, which is ran by Miss Hannigan, played by SCST veteran Natalia Crane. Bloemhof belted out “Tomorrow,” the signature song of the production. Bloemhof was a mix of cuteness and precociousness in her portrayal.

But there were not just a couple of stars that carried the show. The entire cast was strong in singing and dancing, from Bloemhof, Crane, Lauren Givens as Grace, Matthew Maldonado as Daddy Warbucks, to the adorable and mischievous orphans under Miss Hannigan’s charge.

A plan made by Hannigan and her brother, Rooster, was created to bilk Warbucks out of a reward offered for finding Annie’s parents. In the meantime, Warbucks gets attached to Annie and decides that he wants to adopt her. Thankfully, the plan was foiled when the FBI found out the true identities of Rooster and his girlfriend, arresting them and Miss Hannigan for good measure.

Annie is reunited with a little friend she met along her journey, a four-legged one named Sandy. She celebrates with her, the Warbucks household, and her friends from the orphanage on her upcoming adoption. 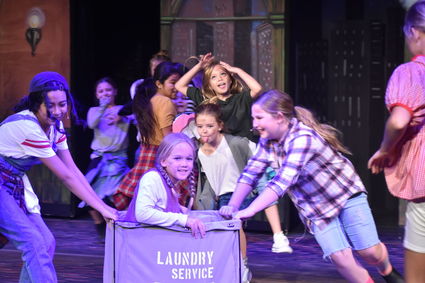 The Shafter Children’s Summer Theater program was started 24 years ago by Cris Starrh. She is assisted help from Kassandra Martin as director, Brent Starrh as assistant director, and Wendy Wilson as musical director. The production used a live band, under the direction of Chad Givens, who also played the drums in the production. The children started rehearsals in June and worked all summer, building up to the performance nights with many hours of work on the score and choreography.

The production left a heartfelt message in the playbill, as they dedicated this year’s production to Fred Starrh, who passed away earlier this year. Starrh was a long-time supporter of the arts in Shafter, especially among the young people of the community.