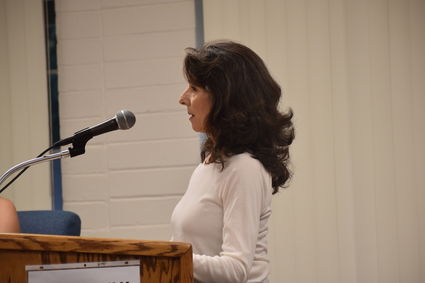 Mary Crabb-Sharron speaks to the council about her family members who had served in the military.

The Shafter City Council reversed their decision made on July 2 when they voted 3-2 to put a marker at the Veterans Memorial at Veterans Park with their names and titles on it. There will be no additional plaque.

At the meeting on July 16 it was decided that they would revisit the issue at the next meeting after several citizens spoke out about their disagreement with the decision, and several more residents who spoke against it Tuesday night: Mary Crabb Sharron, who said that she had relatives who had served in Vietnam, including a brother-in-law she never met because he was killed in the war. She said, "I think that there are plenty of places to put your names if you want that, but not at this memorial. Just don't do it there," and Tommy Rodriguez, owner of Deluxe Barber Shop and a veteran, who said, "Veterans Park was created in 2009, if you think it is important to have the names and titles of the members on a plaque there, why not put the members' names on it that were actually part of the creation of the park, not the members who are serving right now?"

Mike Miller, of the AmVets organization, said that at no time during the planning and creation of the memorial did the subject come up of putting the names of City Council members on a plaque at the site. "I would like to know why you think you should have your names and titles there at a memorial that honors our veterans."

Rafael Zamudio also spoke up with a similar opinion. Zamudio said that he had a lot of friends who are veterans, and it was not right to put a plaque with their names on it with the veterans that served our country and are honored at the memorial. "You guys have done a good job getting some of our alleys done, why not put your names on one of these alleys if you want your name on something."

Councilmember Chad Givens said that he did not vote for the plaque during the first vote, and he would not be voting for it this time. He said that he did not think it was appropriate for the plaque to be there. Councilmember Cathy Prout had the same sentiment. Prout said, "I voted no on this and I still do not think that it has any place at the memorial."

Councilmember Manuel Garcia, who was in favor of revisiting the issue at the July 16 meeting, said that he did not want his name on any plaque at the site, but he qualified his remarks.

"I talked to five veterans, and they did not have a problem with it. They said that we should go ahead and put the plaque in. So, I think it is just who you ask about it."

Mayor Pro-Tem Cesar Lopez said that he didn't want his name on it, either.

"Let me say this, there are plaques with names and titles at the Shafter Veterans Hall, and nobody seems to have had a problem with that."

He went on to say, "As for using taxpayers' money for the plaque, the city got a new Christmas tree, spending taxpayer money on it and nobody had a problem with it, but they do with a $1,000 expense for the plaque?"

Lopez, who originally voted for the plaque, said several people talked to him about the issue and not have a problem with the plaque, but they would not come and speak at a meeting. "There is a bigger problem here. They will not come to meetings to speak."

Mayor Gilbert Alvarado said that he would not be voting for the plaque either, but said that the issue got turned around from what its original intention was. "We did not intend to offend anyone. I thank everyone who has served our country. This was not meant to put us on a par with the veterans being honored. We are not un-American or communists."

He also saw a problem with the debate.

"I have people here that I consider friends that did not come to me to talk to me about this," he said.

A vote was taken, and it was decided that there would be no additional plaque being added to the memorial site. 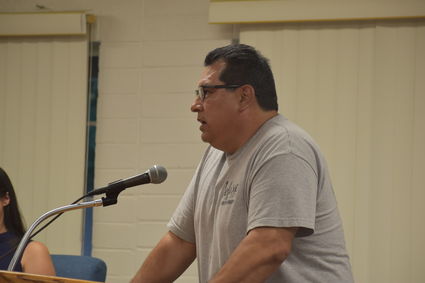 Tommy Rodriguez, a veteran and downtown business owner, encouraged the members to reconsider their decision.

Earlier in the meeting, Don :Loveless red part of a letter he had sent to the council. He said that there is an anxiousness in the city about the direction that the city is heading. He said that there are rumors going around that changes are looking to be made, but no one actually knows what these changes are. "I would like to suggest to the council that they find a way to inform the citizens what their intentions and goals are. If they knew what the changes entailed, it might alleviate some of the worry and concern being felt right now."

Gary Rodriguez also spoke, wanting an update on the progress of the North Shafter Improvements Project that is underway. Rodriguez was told by Public Works Director Michael James that the city had met with Caltrans and surveying on the land will likely start in the next week. He also said that they are in talks and have requested putting a light at the intersection of Fresno Avenue. James also said that they are receiving and installing a speed sign that will be on Highway 43, letting drivers know how fast they are traveling and reminding them to slow down. A closed, secret session followed, involving the performance evaluation of City Manager Scott Hurlbert.