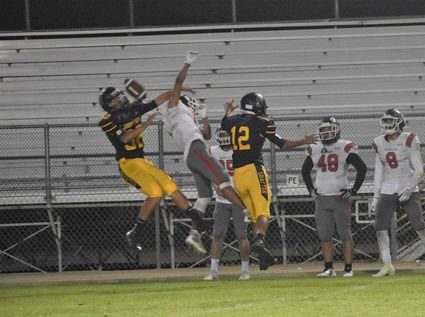 Chris Lindsay catches a pass for a touchdown.

The Shafter Generals celebrated their Homecoming night with a rout of the McFarland Cougars by a score of 47-7, upping their SSL record to 2-1.

Shafter kept the momentum that they created with a win on the road at Taft as they came out scoring on Friday night.

Coach Jerald Pierucci decided to start Jackson Sanchez at quarterback against McFarland after the Generals' breakout game against the Wildcats. On their first possession of the game, the Generals wasted no time and gained 45 yards on their first three plays of the game, including a 35-yeard pass play by Sanchez to Felix Chacon down to the four-yard line.

Shafter ended the drive with Nelson Hernandez getting into the end zone from four yards out, giving the Generals a 6-0 lead.

McFarland would answer on their next possession, giving them the lead, 7-6, but the Cougars would be shut out the rest of the way.

The Generals defense hounded the Cougars' quarterback all night, making him scramble for yardage.

Shafter would score on their next possession when Hernandez would score from 11 yards out after Sanchez gave the Generals a first and 10 at the 11-yard line with a 34-yard run.

In the second quarter, Sanchez connected with Chris Lindsay for a 47-yard touchdown to put the Generals up 19-7.

Shafter got the ball right back five plays later when the Cougars were facing a third down and 10. Leo Fernandez intercepted the pass and returned the ball 36 yards to give the Generals a first down in the Cougars' end of the field. Tyson Dozhier entered the game as quarterback and kept the momentum going with some solid play.

Shafter would add to their lead three plays later when Tyson Dozhier hit Chacon for a 26-yard touchdown pass with four minutes to go in the first half.

The second half saw the game played with a running clock, with the Generals still managing to score three more times. 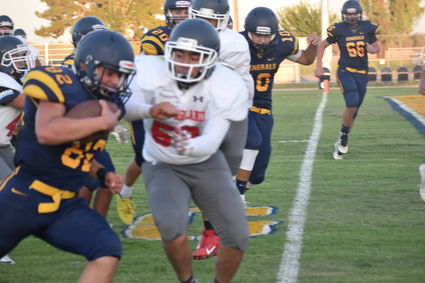 Joey Sanchez goes in for a score.

With Dozhier at the helm, the General offense racked up over 200 yards in the second half alone. Dozhier would score three times in the half, all on rushing touchdowns, giving the Generals the 47-7 win.

With this new one-two punch of Sanchez and Dozhier at quarterback, the Generals could be a team that is ready to take the SSL by storm. Shafter has improved over the past few games, getting better with each game.

The Shafter junior varsity squad enjoyed their most productive game of the season as they routed the Cougars JV, 52-0, The Colonels had Joey Sanchez at quarterback again this week and Sanchez had a great game, with over 159 yards rushing on the ground, including two touchdowns.

The Generals will take on the Bears of Arvin in Shafter on Friday night, with action beginning at 7:30 p.m. It is also Pink-Out Night, in honor of Breast Cancer Awareness Month. Everyone is encouraged to wear pink.