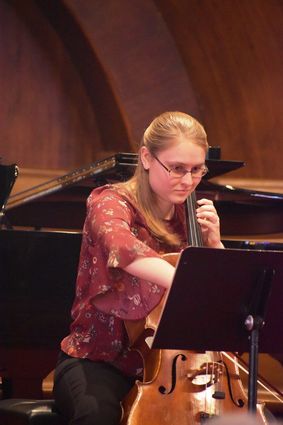 Anna McCoy brings a mellow, soothing sound out of the cello.

Shafter Mennonite Brethren Church was the site of an afternoon of classical music sponsored by the Shafter Symphony.

Stephen Penner of the Shafter Symphony led a group of talented, local residents who displayed their skills in a series of challenging pieces. Ben Wilson opened the recital with a lively Concerto in E-flat written by Johann Baptist Georg Neruda. Featuring Wilson on the trumpet and Rose Peterson on the piano, the concerto took the audience on a trip with its series of stanzas that included a fast-paced finale.

Beethoven was represented in the concert, with Stephen Penner performing Beethoven's Horn Sonata in F, op. 17, Allegro. The popular sonata flowed in the beginning, with Penner and pianist Meg Wise starting at a wistful and lazy tempo, and built up to a brisk, playful pace by the end.

The concert also featured Charis Frantz on the oboe, performing a concerto composed by Benedetto Marcello. She was also accompanied by Meg Wise on the piano.

Playing the cello, Anna McCoy treated the audience to a sonata by Felix Mendelssohn. McCoy brought out the mournful and deep-bodied sound the cello is known for, while being accompanied by Patrick Bender on the piano.

The concert concluded with a performance of four pieces by a brass ensemble. Members of the ensemble were trumpets Paul Hirst and Ben Wilson, Stephen Penner on the French horn, Mike Hutchinson playing the trombone, and Randy Toews on the bass trombone.

Violin virtuoso Kara McCoy performed a concerto by Wolfgang Amadeus Mozart. The Violin Concerto No. 5 in A-Major challenged musicians with a series of interludes that flowed back and forth from McCoy to Bender on the piano. 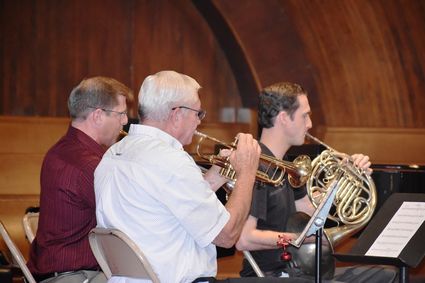 Trumpeters Paul Hirst and Ben Wilson with Stephen Penner on the French horn. The trio were members of the brass ensemble that closed the show.

The Shafter Symphony put on the concert as part of a series of events for those in the community who enjoy a variety of types of music.

The city of Shafter is fortunate and unique, having a collection of local musicians that can give the small community a musical experience that is usually reserved for big cities. Music lover and Wasconian, Julia Conway, came to the performance and said it was a great thing to have such talented musicians right here in our area. "I have gone to Bakersfield and Los Angeles to see concerts, but it is such a blessing to have this level of music right here in our small cities."