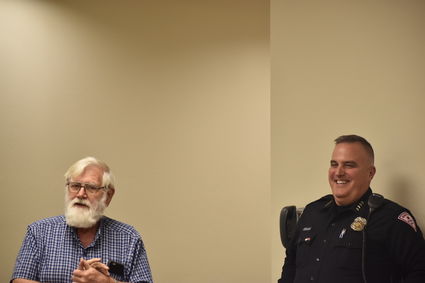 Zimmermann, who has been in the position for three years, said that when he first came into the position, he was surprised by the lack of department history available to the public. "I took a trip to the Shafter Depot Museum and was really surprised that it didn't have a section on the police department. There was a badge, I think a patch from the Fire Department, but there wasn't much of anything there representing the law enforcement in Shafter," he said.

Historical Society Curator Stan Wilson told Zimmermann that no one had come in with anything from the law enforcement agencies in town. "It really takes someone who is interested in preserving the history and helping us keep the memories alive," Wilson said.

So, Zimmermann made that one of the first missions of his tenure as chief. The Shafter Police Department Historical Committee was formed – which he said is essentially himself and Captain Diana Burnett – and they started making calls to past chiefs and their families, looking for artifacts and information.

To begin the quest, Chief Zimmermann thought a "Patch Project" would be an easy place to start. He researched the patches that had been used over the years and looked for any that he could get from past officers. He received a few patches but had trouble locating the one that had first been used back in the 1930s and 1940s. After months of searching, Captain Burnett located one online and acquired it. Zimmermann then approved the patch to be used by the newly formed Shafter Honor Guard.

Up next was the Badge Project. The committee acquired several badges that had been used through the years by past chiefs and officers. "We received a large collection of memorabilia from the family of Bob Nixon, who was chief of police from 1974-1978. We are still working on going through all of the items that we received," Zimmermann said.

He said they were very fortunate to receive so many items from the families of officers and chiefs who had served in the department.

According to Zimmermann, the project is important not only to have a historical record of the past, but also to serve as a bridge to the present. "I want there to be a tangible history that my officers today can look at, seeing where this department has come from – the rich history of the department that they are serving in today."

Zimmermann went through the different chiefs in Shafter's history, starting with Murray Arnold, the first chief who served from 1938-1940. Murray was only 23 years old when he was chief of the department. He then went on to be a newspaper man. John Reilly succeeded him and served for 18 years, from 1940-1958. Reilly actually started his law enforcement career as a constable in the area, then started in the SPD after it was formed in 1938.

One of the crown jewels of Zimmermann's collection is the handgun that Reilly used when he served as chief. It is in the display case with a vast array of artifacts the committee has collected since its inception.

Another great talking piece in the case is a shovel handle. It was given to Zimmermann by Shafter barber Elro Cramer. Cramer told Zimmermann that it belonged to Chief Kaplan, who had given it to him one day when he was headed out of town. Zimmermann asked him, "So you kept it for 40 years?" Cramer replied, "I keep everything."

According to Cramer, Kaplan was looking for a weapon and didn't think the standard billy club was big enough, so he started using the half-length of a shovel instead. 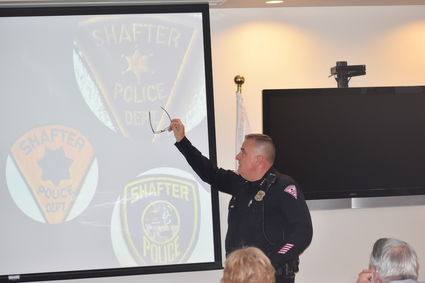 Zimmermann explaining how the committee created the Patch Project.

Kaplan is one of the most colorful chiefs in Shafter's history. According to Chief Zimmermann, he was featured in the [BEGIN ITAL]Los Angeles Times[END ITAL] for being chastised by Kern County Judge Milton Elconin as a disgrace to the badge. Elconin dismissed 14 cases that involved Kaplan arrests, saying that Kaplan and his department had repeatedly used excessive force, a charge that was ultimately without merit.

Zimmermann said there were 13 chiefs before him, each of them leaving a legacy of service that the city of Shafter can be proud of. He said he is proud to be a part of this department and is excited to bring the history of the department to the people. Anyone who would like to see the history is welcome to visit the display cases in the halls of the police department.

The committee's next goal is a book that will chronicle the history of the department, with information, articles from different papers, pictures and tales from the past. The book will be the next step in the Shafter Police Department's mission to leave their footprint on the community.