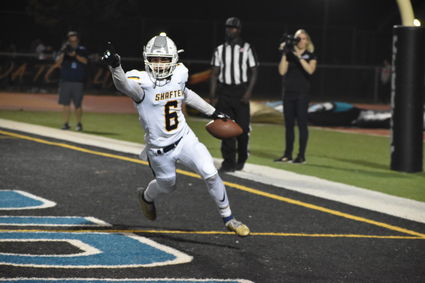 Sanchez opens the scoring with a 12-yard touchdown.

Could have piece of SSL title with win Friday against Wasco

The Shafter Generals pulled off the biggest upset of the football season so far as they knocked off the previously unbeaten Kennedy Thunderbirds, 27-21, on Friday night, giving them a chance to capture at least a share of the South Sequoia League title.

The last time the T-Birds lost a game to a Central Section team was to the Generals during the regular season last year. Kennedy then went on to go undefeated the rest of the season and beat the Generals in the Valley Championship game.

Shafter exacted revenge on Friday night as they beat Kennedy in every phase of the game. Shafter began on a high note as they stopped Kennedy cold on their first possession. Kennedy had won the coin toss and elected to get the ball first, to the Generals' advantage.

"This is like a slap in the face to you guys on defense; they want the ball first," Coach Jerald Pierucci told his defense. Shafter went out and showed them what a mistake it was and stopped the T-Birds on three straight plays, forcing a punt.

Shafter took the ball on their first possession and scored when quarterback Jackson Sanchez found the end zone from 12 yards out.

Shafter had a chance to distance themselves early from Kennedy when the Shafter defense dominated the T-Birds on their next possession as well. Forcing to punt deep in their own territory, the Kennedy punter's kick was blocked by Leo Fernandez, giving the Generals the ball at the Kennedy 5-yard line. Shafter couldn't punch the ball in, turning the ball over on downs.

But, the Shafter defense didn't let up its pressure and gave the ball back to the Generals when they forced a T-Bird fumble and recovered it, giving the Generals good field position again.

Sanchez ran for another touchdown, this one a 52-yarder, giving Shafter a quick 14-0 lead, stunning the T-Birds and the home crowd.

Playing an almost flawless first half, the Generals defense did let their guard down on one series that let Kennedy sneak back into the game with a touchdown late second quarter, cutting the lead to 14-7 going into the half. With time winding down, the T-Birds looked to be inching toward tying the game, but Shafter's defense once again stiffened and forced the T-Birds into a long field goal attempt, which was no good.

The second half saw the Generals widen their lead, as they scored on a long pass play from Sanchez to Devon Sundgren, giving Shafter a 20-7 lead. Kennedy has boasted a high-powered, explosive offense the entire season, which has seen them pull away from teams in the second half. On this night however, the Generals' defense had an answer whenever the TBirds would start to mount a drive. With outstanding play on the line of scrimmage, the TBird running backs were held in check for the majority of the night. The defensive backs also came up big on third down situations, either breaking up big passes, or getting timely interceptions, such as one by Leo Fernandez that sealed the game.

With the Generals leading 27-14 and under five minutes to play in the game, Kennedy was the recipient of one of the few miscues on the Shafter defense. A pass completion by Kennedy turned into a 60-yard touchdown when the General defender lost his footing, allowing the receiver to waltz into the end zone, cutting the lead to 27-21. 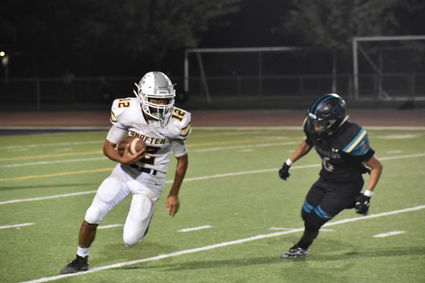 Leo Fernandez seals the win for the Generals with an interception.

Generals fans hearts skipped a beat as the T-Birds recovered the ensuing on-side kick, giving Kennedy one last shot for a score with under two minutes to play. But this is when Shafter got its big play from Fernandez, giving the Generals the biggest victory of the season for the locals.

After the game, Coach Pierucci said, "It is kind of a bittersweet victory. This game wasn't for a ring. But, for a team that started out 1-4, to work our way back to 5-4, this was a big, big game."

Shafter will share the SSL title with a win next week when they host rival Wasco in the regular season finale. This also would help give the Generals a higher seed entering the Valley Playoffs. With Wasco Week starting on Monday, there will be several events and activities leading up to the big game on Friday night, including a Community Rally on Wednesday night at Shafter High School beginning at 7 p.m. The community is encouraged to attend the rally that will include music, cheers, games and the traditional bonfire with the burning of the Tiger.