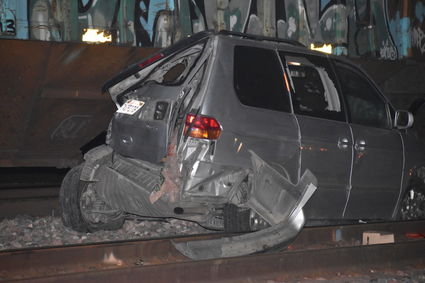 The driver of this minivan was able to exit the vehicle before it was struck.

The driver of a minivan narrowly escaped injury when the vehicle was struck by a train on Tuesday evening.

Shafter police received a call at approximately 8 p.m. about a vehicle being struck by a train.

According to Shafter Police Sergeant Randy Mulligan, the driver of the vehicle was unfamiliar with the area and got his minivan stuck on the train tracks. "The driver, who was using his navigational system, entered the intersection at Beech Avenue and Highway 43, and turned onto the railroad tracks, becoming stuck on the tracks," Mulligan said.

Unable to get his vehicle off of the tracks, the driver, who wasn't named, was able to exit the vehicle before the train struck the vehicle, destroying the rear end of the minivan.

This is the second incident involving a train and vehicle in a week in the Shafter area. Last week, at the intersection of Highway 43 and Shafter Avenue, Enrique Garin, 31, the driver of a white Dodge sedan, fell asleep on the tracks with a train approaching. Police officers were able to get Garin out of the vehicle before impact, allowing Garin to escape injury.