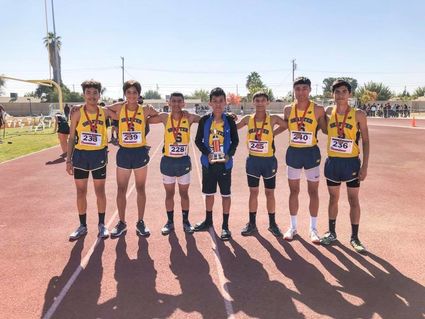 The Shafter High School fall sports season came to an end with an awards ceremony that honored outstanding performances in all of the sports except for the Shafter Varsity Football team, which will hold their awards ceremony at a later date.

For the junior varsity Colonels football team, those recognized were the Most Scholarly, who was Gus Waterhouse; Team MVP Jacob Saldana; and the Offensive and Defensive MVPs.

Joey Sanchez, who stepped in to quarterback the team midway through the season, and played wherever the coaches needed him, racked up yards on the ground and through the air on his way to the Offensive MVP honor.

On the defensive side of the ball, Damian Duran got the nod for the MVP. The freshmen team named Armando Loera as their Most Scholarly, Jeronimo Ceja as Most Improved, Joel Guitterez as Most Inspirational,and Roberto Lopez as the team's MVP.

The girls golf team recognized Valerie Gomez as the player with the lowest average, as well as Yarely Coronado as Most Inspirational. Abril Sanchez was the team's Most Scholarly and Monique Gomez was Most Improved.

The Lady Generals volleyball team, which had a challenging season this year with a young team, honored a few players at the event. Alicia Pompa was named Most Inspirational and Madison Mendoza was Most Improved. There was a tie for Most Scholarly, which went to Yanelly Arellano and Francheska Santos. Santos was also named the team's Most Valuable Player.

The JV Volleyball team named Franchesca Ruiz as their Best All-Around player. Most Improved honors went to Jazmin Torres, while Most Inspirational was Mitzy Zamudio. There was also a tie on the JV team for Most Scholarly. The honor was shared by Denise Mendoza-Castillo and Jimena Espinoza.

The cross country teams enjoyed success this year, with the boys varsity team capturing second place in the prestigious Jim White Invitational in McFarland. Raymond Matta was named the team's Most Scholarly and also received the Leadership Award. Most Improved was Salvador Pelayo, while Mr. Reliable went to Adelmo Perez. Luis Castro received the Coach's Award.

The girls varsity team recognized Stephanie Ledezma as Most Scholarly and Angeles Cholico with the Toughness Award. Top Newcomer went to Saralee Tellez and Most Improved was Katie Hernandez. The Consistency Award went to Adriana Coca.

The boys junior varsity team named David Castro as winner of the Leadership Award, while giving the Most Improved award to Luis Torres. The JV Girls handed out the Most Scholarly Award to Natalia Pena and the Toughness Award to Ariel Morales. The Coach's Award went to Estrella Aguilar. 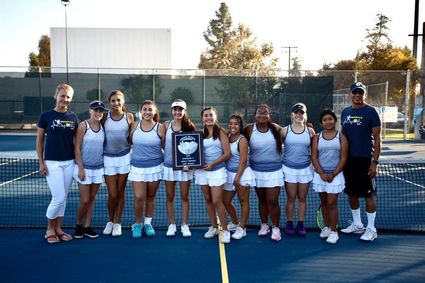 The girls tennis teams had their most successful season in over two decades. The varsity girls played Tulare Mission Oak for the Division V Valley Championship, dropping a heartbreaker, 5-4. The varsity girls named Evelyn Roldan as their Most Scholarly and Arly Galinda as the Most Dedicated. The Best Competitor Award went to Yesenia Gil, and Nicole Morris was named the Best Doubles Partner.

The junior varsity team had Julia Montoya as their Most Scholarly and Andrea Carreno as Most Inspirational. Rounding out the awards were Ashley Castillo as Most Improved and Judith Gomez as Most Valuable.