A great debut for 'A Good Man' 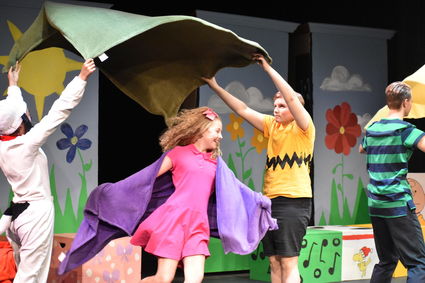 The kids dance with Linus during his signature song, "My Blanket and Me."

The Young Adult Theater of Shafter finished its debut production this past weekend with crowds on hand to see their performances of the classic "You're a Good Man Charlie Brown."

The production used a cast of six actors, each showing their prowess on the stage, be it covering the stage during a dance number or belting out a song.

Charlie Brown was played by local theater veteran and Shafter High Drama Club member Bethany Neufeld. Neufeld said that she had previous experience in Starrh's Shafter Children's Summer Theater, as well as participating at SHS. She said that enjoys the thrill of the performances and likes being in the spotlight.

The spotlight was indeed on her as she portrayed that perennial loser Charlie Brown. The play is a day in the life of the "round-headed kid," as his dog Snoopy calls him, as he wonders why he is on this earth, where or if he fits in anywhere.

Playing his faithful four-legged companion was Paulina Evangalista, who has delighted audiences in previous productions. In this one, she played Snoopy as sassy and precocious, just like Snoopy's alter ego, "Joe Cool."

Lauren Givens, who has played a variety of roles in the Children's Theater, such as Ariel in "The Little Mermaid," was a delight as the sarcastic, acid-tongued, cranky Lucy. Besides her main target of her wrath, Charlie Brown, Lucy also relentlessly pursued the piano-playing Schroeder, who spent his time practicing his music and fending off Lucy at every turn.

Newcomer Joel Espinoza portrayed the blanket carrying, thumb-sucking Linus. According to his mother, this is Espinoza's first role in a large production. "I was in a couple of plays with our church, but this was the first time for something like this," said Espinoza. He said that he has made a lot of friends during the production, and it has been a lot of fun because it was so different than anything he has done before.

Woodstock, Snoopy's yellow-feathered friend, was played by Micah Neufeld. Charlie Brown's little sister, Sally, was played by Megan Bloemhof. Bloemhof stole almost every scene she was in, with her adorable, but wise-cracking character. Bloemhof was the star of the Children's Theater's production of Annie. She once again showed her aplomb on the stage by belting out a song or telling a whole story with her face and mannerisms.

The crowd was alternately clapping for the characters and laughing at the skillfully played roles. Music accompaniment was provided by Chad Givens, Caleb Privett, Cris Starrh and Dana Starrh.

Directors of the production were the Starrhs, with Katelyn Akman serving as the musical director and stage manager. The choreography was done by veteran professional Cody Garcia. 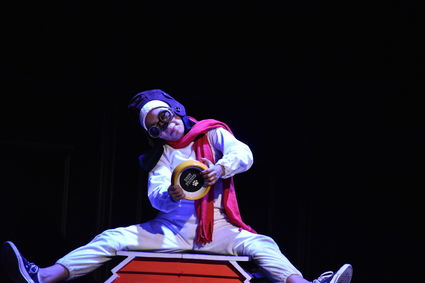 Snoopy in a battle with his nemesis, the Red Baron.

This is the first production of the group, and Starrh said that there are plans for more ventures in the future. "We are thinking of holding an improvisational workshop, as well as theater boot camps, reader's theaters and talent shows. There is a lot of talent in this town, and we want to have a showcase for this talent. We will provide an outlet for those who are interested in improving their theater skills, be it on the stage or behind the scenes."

"This theater group is for those in junior high, up to people in their thirties," said Starrh. "We are looking forward to growing this group and offering a variety of outlets for the abundance of talent there is in this area."