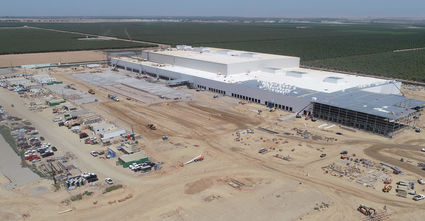 The Walmart distribution center is scheduled to open in the fall of 2020.

The City of Shafter has been enjoying a reputation of being one of the fastest growing cities in business in recent years, attracting such companies as Target, Ross and several other big retailers.

The most recent addition is Walmart, which is scheduled to open the most technologically advanced distribution center in the nation in Shafter in the fall of 2020.

Bob Meadows, business development director for the city, says Shafter is a sought-after destination for businesses, large and small.

"We have several irons in the fire. This year should see the city continue to build on this success and make 2020 a special one."

Financially, the city has been touted as one of the most financially sound cities in the state. Meadows said that since he joined the city last year, he has become aware of the great reputation the city has in Kern County, as well as in the state of California.

A big draw for the city, Meadows says, is the willingness of the city to work with potential developers and retailers, as well as the technological advantages Shafter has. "Having the city connected through our fiber optic lines throughout the city has been a great benefit."

Looking forward into 2020, Meadows said that the biggest item on the agenda so far is the opening of the Walmart facility. This will mean over 200 jobs for the community, with about a third of the jobs STEM-related – tied to science, technology, engineering and mathematics -- with the other two-thirds general laborers.

"We are excited to see how many of the jobs are going to go to Shafter residents, which will mean the dollars staying here locally," commented Meadows.

Another exciting development for 2020 is the growing relationship between the city and the Kern County Hispanic Chamber of Commerce. The KCHCC has been very beneficial to county and its businesses, Meadows said, with a good many of businesses working with the chamber enrich the local communities.

In addition to the contacts that are made with a relationship with the chamber, they also have made a big impact on local businesses with holding their business academies. The academy is a 12-week program that helps small local businesses learn how to operate successfully, as well as how to market their products and services, and get their companies out in the community. "We are looking forward to the possibility of holding a business academy right here in Shafter for our local businesses," said Meadows.

As far as new businesses on the horizon, Meadows said that there has been a lot of interest in several locations throughout the city, including the property at Central Avenue and Central Valley Highway that used to house Brookside Deli. "We have a couple of people that are very interested in the property, and they both are food-related, which is good because the property already is equipped to house a food establishment," Meadows said.

He said that they also have had discussions about different businesses coming to Shafter, including a veterinarian, additional automotive service businesses, a drive-thru car wash and additional medical clinics. "Rural medicine is a big issue in our economy, with a lot of people looking for affordable healthcare," Meadows said.

The city was the recipient of surplus of sales tax revenue last year. This unexpected development was the result of a large number of customers who ordered products online this year.

Retailer William Sonoma paid the city a large amount of sales tax money that was not forecast. "A lot of people ordered online this last year," said Meadows, "which was very nice for us."

Meadows said that the businesses at the Wonderful Logistics Park do amazing things when it comes to business relationships across the state and the United States, but there is not a lot of actual income that is produced out there.

"The difference in the William Sonoma retailer and retailers like Target and Ross is that for the online ordering, the sale is actually in the city of Shafter. With the distribution centers, the sales are not done here, the product is just shipped to and from a location, so the sales tax money goes to the city where the sale actually takes place."

In addition to the Hispanic Chamber, the city also has been in contact with the Small Business Development Center in Bakersfield for a possible workshop in the near future. The group, based out of Cal State Bakersfield, held a workshop this last year that was well attended and gave local business owners valuable information about how to grow your business, including marketing and creating a presence on social media, as well as how to go about financing a business venture.

"What we are looking at would build on that workshop, becoming a regular meeting that would be set up for our small businesses who may need advice on how to operate their business, as well as getting them in contact with the correct people and agencies to further their success," Meadows said.

"The business landscape is looking up for Shafter when it comes to all phases of the business arena," Meadows concluded.