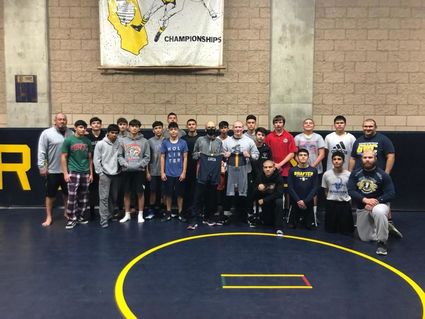 In the competitive sport of wrestling, there are fierce rivalries amid the different leagues and divisions, making the season full of hotly contested matches, be it in duals or tournaments. But those competitive wrestlers came together recently when one of their own found out that he was facing a daunting challenge off the mat.

Nickolas Garza, a junior at Shafter High, was diagnosed with leukemia and is fighting the disease with several rounds of chemotherapy. When the local wrestling community found out about this, they came together in a show of support that made a statement of solidarity.

Garza was on the junior varsity team the past two seasons, working his way up the ladder, preparing for his chance to wrestle on the varsity team. Right before the season began, Garza, who had been experiencing some pain in his shoulder and stomach, went to the doctor and got the alarming diagnosis. He was immediately transported to the Children's Hospital in Madera.

Golden Valley wrestling coach Joe Rojas, through tournaments and practice clinics, had made a connection with Garza, and was moved by the news. Rojas, who had a full head of hair that hung to his shoulders, decided to show his support for Garza, who had lost his hair due to the treatments, and had his head shaved.

Afterward, several more wrestlers and coaches followed suit and before they knew it, there was a gym full of shaved heads united as one. "It is only hair," said Rojas, "It will grow back. This is just to show that we support Nick, and we are here for him." He said that a lot of the wrestlers have known each other since they started wrestling in youth teams at the ages of seven or eight years old.

Shafter Coach Spencer Hill, who is in his first year of coaching varsity after the retirement of

Rick Gabin, said that the support has been growing in recent weeks. "Through posts on social

media, the entire wrestling community has learned of Nick's fight and several have shaved their

heads on their own." These include wrestlers from North High, as well as Foothill.

Jayven Rojas, son of Golden Valley coach Joe Rojas, described his feelings: "With wrestling, we are only rivals on the mat, or during tournaments. But off the mat, or in practice, we are all a big family from another mother, another school."