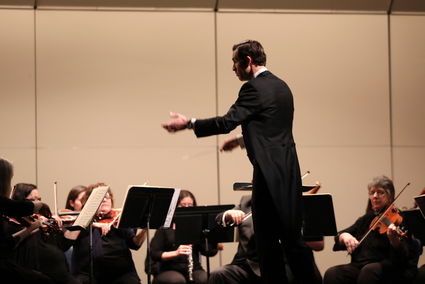 Conductor Stephen Penner leads the symphony through an intricate piece.

The Shafter Symphony, led by conductor Stephen Penner, performed for audiences throughout the weekend with the final events of this year's Colours festival, with concerta that took listeners from Mozart to Beethoven.

Saturday evening, Penner acknowledged Concertmaster Julia L. Haney, and the concert began. The ensemble is made up of several local players in around Shafter and Kern County, and has played at the last few Colours Festivals, featuring everything from Hollywood favorites to classics, such as this year's performance.

The orchestra began the evening with Symphony No. 40 in G minor by Wolfgang Amadeus Mozart. The piece has four different parts, and each one seems to tell a different tale. From the low vibrato of the cello to the impossibly high notes hit by the violins, the night was filled with a number of difficult pieces that tested the musicians' skills.

The Mozart piece has parts that have a slow, lazy mellow tone, but the piece builds to a crescendo of sound, bringing the music up a level and a spike of intensity. 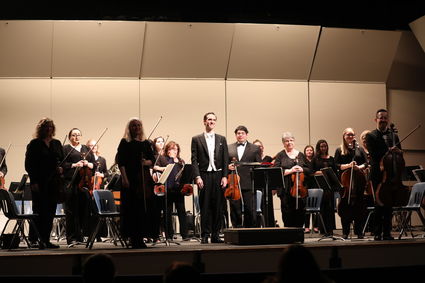 The Shafter Symphony performed for over 1,200 people over the weekend.

The Beethoven piece that was performed was Beethoven's Symphony NO. 4 in B-flat major. This is a tried and true piece that has brought the excitement of classical music to a wide range of people. The violins carry the majority of the load in this piece, with the strings being the star. Haney and her section were up to the task, and put on a performance that displayed the delicate sound of the violin at points, and also how powerful it can be when it is played with the intensity the symphony's program.

The symphony also was able to play in front of a packed house on Friday, as they put on performances at the Shafter High School auditorium. This was the second year of this event, as the musicians in the orchestra were greeted with thunderous applause as Penner and a few of his musicians played some classics.

The ensemble played for all of the elementary schools in the area. The kids were appreciative of the music and respectful to Penner and his group. Penner spoke between during pauses in the music to give information on the different sounds that the symphony could make come out of their instruments.