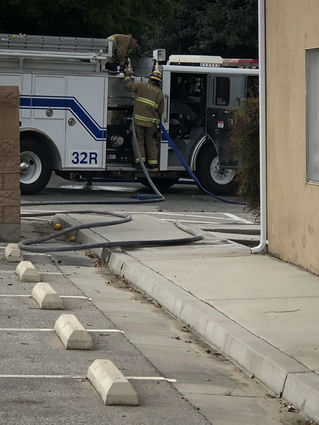 There were a total of seven engines dispatched.

The building that houses The Shafter Press and Wasco Tribune, and the former location of Brookside Deli suffered extensive smoke damage and a small fire on Monday morning. But due to the quick response of the Shafter Police Department and the Kern County Fire Department, the damage did not go any further than a portion of the former deli.

Shafter police were dispatched to Central Avenue and Central Valley Highway a little after 8 a.m., when smoke was reported coming from the building. Upon arrival, officers found smoke billowing from the former deli's side of the building. Sergeant Randy Mulligan stated that a glass door in the patio area between the deli and The Shafter Press office had been busted and the door jamb appeared to be pried.

After an initial investigation, it was believed that no one had been in the city-owned building because the deadbolt on the door had been engaged when they arrived. Later, it was determined that it is likely there had been someone inside the location sometime during the night or early in the morning. "A window in back was broken, and it appears that someone had entered and exited through it," said Dennis Fiddler, building official for the City of Shafter. "There was a wire that was burned in the wall of the restroom, but it appears that the fire was started in a trash can in the restroom of the former deli.

"Though the wire was burned, it doesn't appear to be started by that, with the hottest part of the fire appearing to be located in the trash can." 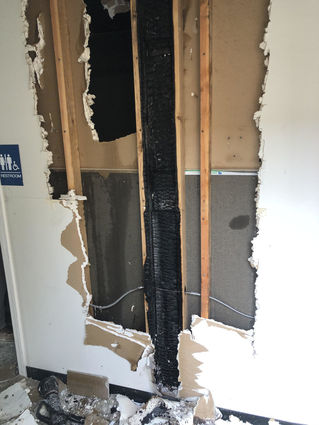 A wire was burned, but it was believed that the fire was started in a waste can in the restroom.

It was déjà vu for General Manager Diane Given, who was office manager for the newspaper when The Press office was destroyed in February 2011 by a fire that was started in the laundromat next door at the corner of Lerdo Highway and Shafter Avenue. "The first thing I thought of when I got the call was, "Oh no, not again!" Givens was relieved when she pulled up and saw that the building was not engulfed in flames.

Initial reports of a person in the building upon the arrival of the Fire Department were not confirmed.

Estimates on the damage of the fire were not immediately available, and the investigation is ongoing. The location has been victim to several instances of people entering the patio area between the two buildings and staying overnight.

The upstairs attic space that houses and displays different decorations during the holiday seasons and The Press and Tribune offices suffered no damage in the incident.