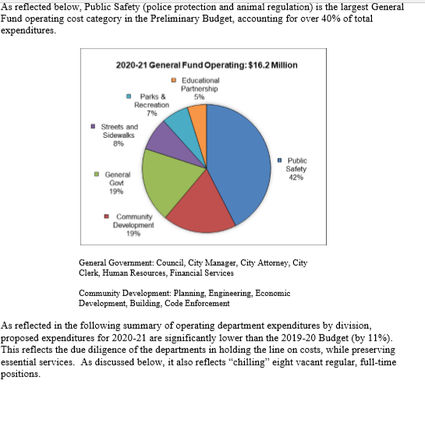 From the city's draft budget.

The Shafter City Council got a sneak peek at the 2020-21 budget at a special meeting Monday night.

The budget is very different than what had been projected in earlier discussions, primarily the result of the effects of the coronavirus pandemic.

Consultant William Stadler, who was retained by the city to help them form the budget, presented the council with an overview that included a drastic reduction in capital improvement projects that the city had previously slated for the next fiscal year.

In a move that is being called a "chilling," the Council has been advised to pause improvement projects that had been budgeted the current fiscal year, but had not moved forward as yet. They decided to move forward to completion with the projects that have already been started, but to hold off on new projects. "They are still in the budget, but they will be chilled and will not be moved forward on until 2021-2022," said City Manager Gabriel Gonzales.

Another "chill" on the agenda is limiting hiring, including 11 open positions that have not been filled. The council was advised to fill four of those vacancies, including two of the four positions open for police officers, and a position for administrative services director. Not hiring the other eight budgeted positions with save approximately $850,000 next fiscal year.

Going forward, the council was advised to use a "lean" strategy when it comes to upcoming improvement projects.

With 14 projects budgeted in 2020-21, it appears they will be going forward with the new Corporation Yard project. The other projects that are budgeted for will be put on hold until 2021-22. These include the Shafter pool project, a police substation off of Seventh Standard Road to cover the Gossamer Grove area, and a citywide camera system, among others.

Despite the pandemic, the city is in a stronger position than most cities in California because of its strategic planning for the future and its unique position with sales tax revenue. While still facing a decrease of about 7.5% in sales tax revenue, most cities are facing 25% to 30% declines. This primarily is due to the revenue coming from online retailer Williams Sonoma, with its call center at Minter Field.

Sales tax revenue is projected to be around $15.5 million, which is approximately 56% of the city's revenue.

There is a $16 million loss contingency in the budget's operating budget due to possible legal action to eliminate the city's sales tax revenue from Williams Sonoma's call center near Minter Field.

This issue is apparently nothing new – the contingency was in the 2019-20 budget, too.

City officials were reticent to talk more about the issue, noting that parts of the city's agreement with the retailer are confidential.

According to City Manager Gonzales, the chance of an adverse ruling on the taxes "is very slim," but the funds are set aside in case of that worst-case scenario. 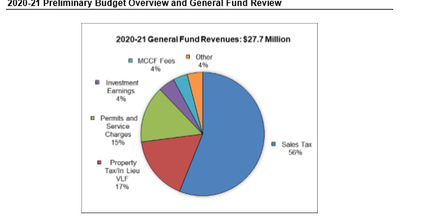 From the city's draft budget.

The operating budget is conforming to Stadler's "lean and mean" strategy, with the overall operating budget reduced by 11% from the 2019-20 budget. Several of these numbers are up for review at the midyear review, in some cases being adjusted up or down depending on the circumstances.