Council gets ready to close prison 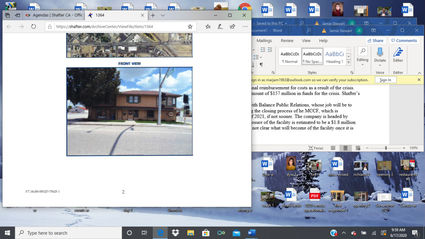 City property at 402 Central Ave., now home to The Shafter Press, was put up for sale.

The Shafter City Council approved a resolution that allows the city to receive almost $700,000 in emergency funds for the Covid-19 pandemic. The council also extended its state of local emergency, which enables City Manager Gabriel Gonzales to act if an emergency calls for it.

It also keeps the city open for additional reimbursement for costs as a result of the crisis.

The County of Kern recently received $157 million in funds for the crisis. Shafter's share of the funds came to $698,000.

The council also approved an agreement with Balance Public Relations, whose job will be to protect the City of Shafter's interests during the closing process of the MCCF, which is supposedly going to be closed by the end of 2021, if not sooner. The company is headed by Shafter High Graduate Dean Florez.

In other council action, the property at 402 Central was declared as surplus land and not necessary for the city's use, putting the building and parking lot up for sale. Shafter/Wasco Publishing is in the space now, along empty space that housed the former Brookside Deli. Any plans for developing the land must be approved by the city beforehand, according to the council's resolution.