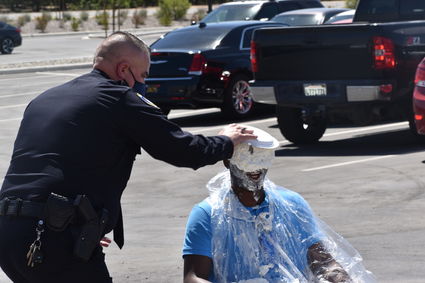 The Walmart Distribution Center in Shafter, which has seen its opening date pushed back into the spring of 2021, celebrated the Fourth of July with a flag raising and a fundraiser benefiting the Children's Miracle Network. Caleb Dobbs, the event coordinator, said this was the first time the flag was raised at the facility. The Shafter Police Department was on hand as well.

Distribution Center 8522 has hit some delays in scheduling its opening date. With much of its equipment coming from Germany, it has been slow in getting equipment and personnel to the United States. Add the Covid-19 restrictions. and it has resulted in a delay that will probably mean an opening date in March or April of 2021 instead of at the end of this year. 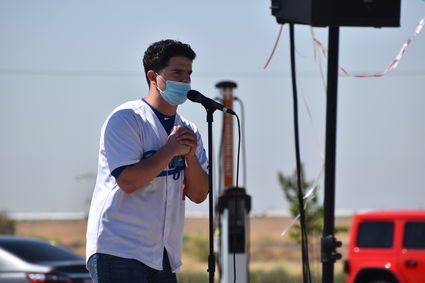 Event coordinator Caleb Dobbs welcomes everyone to the event.

Robin Woodward of the Children's Miracle Network was at the flag-raising to receive a gift from Walmart as a result of the fundraiser.

Employees paid for the chance to hit members of management in the face with whipped cream pies. Three of the managers took turns getting pies in the face, with Ade Silesia leading the dollar total by a huge amount. The good sport took more than five pies in the face for a good cause. Also getting a big helping of pie was the facility's general manager, Ignacio Villa. Joining in the fun was Aaron Mealy. Employees took their turns planting whipped cream in their faces. Afterward, the attendees were treated to a lunch of tri-tip prepared by Mealy, macaroni salad and roll.

The facility, when open, will mean 300 jobs for local residents, with the majority of them STEM-related in nature.