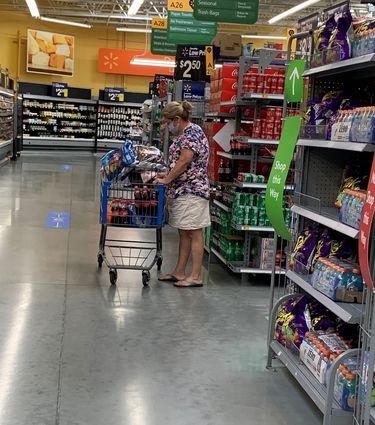 Shoppers at an almost empty Walmart in Wasco Wednesday morning.

Shafter and Wasco residents are suffering from whiplash after learning July 17 they had been removed from the governor's Watch List and July 18 they were back on it again. The number of coronavirus cases are spiking in Kern County. As of July 20, 332 Wasco residents had tested positive for covid-19 with 137 recovered; Shafter had listed 328 positive cases with 207 recovered, according to the Kern County Health Department.

Local businesses in Shafter are requiring all customers to wear a face covering and practice social distancing. The action makes sense to many community residents, while others think it is bothersome.

"I have only gone to stores that don't require wearing a mask, which is about down to nothing now," said Juan Medano. "I hate it that they can tell private citizens what they can and can't do."

Shafter City Manager Gabriel Gonzales announced that Shafter would be closing its city buildings to the pubic again beginning Friday, July 24. They will still be helping people through a window in the alleyway in the back of the city hall building.

Due to the change in Kern County's status, local businesses are now requiring everyone who enters do so wearing a mask.

As of last week, no one can enter the Wasco Walmart without a mask. Fiesta Supermarket requires everyone entering to come in with a mask and has hand sanitizer outside for customers to use before entering the store.

The health department's message to the public for several months has been that beside staying at home and not venturing out in public, the wearing of a mask is one of the most effective ways to help control the virus.

As a continued result of covid-19, on Monday the California Interscholastic Federation announced that education-based athletics and the start of the fall high school sports season will be on hold until December or January.

"We are glad there is a plan to play," varsity football coach Chad Martinez wrote in a text message. "As of now, we have been meeting on Zoom and guys are working out on their own. We have not had any official practices on the field. We are excited to get the chance to return."

Local restaurants are also following the strict guidelines from the governor and health department by discontinuing the short-lived freedom of dining inside restaurants and providing take-out service or outdoor dining only.

Teresa's (758-2027) on F and 5th Street is now serving pick-up as well as dining on their outdoor patio. Customers are asked to approach the patio window, place their order and either take it home or enjoy their meal outside.

Also, Hoyetts Sandwich Shop (758-2065) on 6th and F Street asks that customers call in their order and drive up to the curb as they will bring your order out to your car or just let them know you want to eat it outdoors on the patio.

There have been some additional changes as well with respect to the beginning of school. The Wasco Union Elementary School District might have to put off in-class learning for the time being.

"Since we are on the restricted list, we are almost certainly going to have to start the year with distance learning as of August 10," Superintendent Kelly Richers said in an email Monday."The state rule is no opening physically until off the restricted list for 14 days. Since we go on the list July 21, that means we cannot possibly be off the list until at least the 22nd. Fourteen days from then would be August 5."

Richers feels that the county will be on the restricted list longer than a week. It looks like we will almost certainly have to start the year distance learning only," he said. "It's out of our control."

Local Librarian Tina Garcia asked that Wasco residents write to the Board of Supervisors and let the district supervisor, David Couch, know how important the library is to the residents of Wasco. He can be reached at [email protected] Assistant Superintendent Rob Cobb said there are no specifics at the moment, but the school year will definitely begin with distance learning for the first quarter. 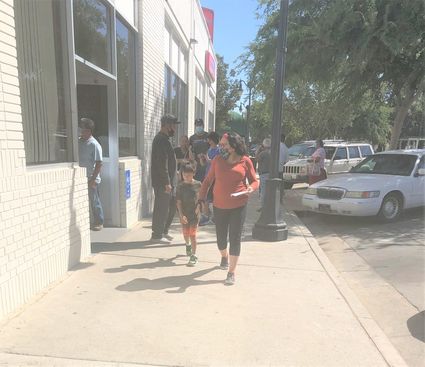 More and more people are wearing masks not just when entering a store but also when they are downtown or walking in neighborhoods in Shafter.

Schools in Shafter will begin the year with distance learning, which has the Richland School District having to put together a different plan than the one they originally planned. The district put out a plan last week that would have a group of students attending school in person on Mondays and Tuesdays and another group going Thursday and Friday. The rest of their week would be distance learning. "With the governor's announcement, we have no choice but to go to distance learning for the beginning of the school year," said Rosa Romero, interim superintendent of the Richland School District

While many things have slowed down or completely stopped, there is an election happening in November and three of the City Council members are up for election. Mayor Pro Tem Danny Espitia (District 2), Mayor Tilo Cortez (District 4) and Alex Garcia (District 5) are looking forward to continuing their service to the city.

The Wasco High School board is meeting Tuesday, July 21, to discuss the opening of school on Aug. 12 and whether there will be any in-class lessons or another semester of distance learning.

In Shafter, there are also three vacant seats for the November election, with Mayor Gilbert Alvarado, Manuel Garcia and Chad Givens having terms that expire December 2020. The nomination period has begun and will continue until August 7, 2020.