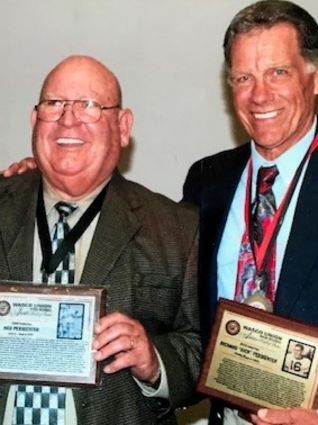 WHS grads Ned Permenter and his brother Dick were both inducted into the WHS Athletic Hall of Fame in the 1950s.

A 1955 Wasco High School graduate, Ned Permenter, was a three-sport athlete all four years while he attended high school, and sports have been a constant throughout his life. He even has a stadium named after him at Foothill High School where he taught and coached.

Raised in Wasco and having attended all Wasco schools through his educational years, he maintains contact with many friends from that time including Harvel Pollard, Chuck Emerson, Dr. Jack Groves, Don Forth, Audra Miller and Frances Cagle Sinclair.

Permenter stated that most of his friends picked cotton, potatoes and worked in the sheds during the summer. "I also worked at my dad's G & L Market on 7th Street," he said.

Even though he is a Tiger all the way, he was able to dismiss the rivalry and marry a Shafter grad named Virginia Chavez. He has two stepdaughters, Jeannine Macias, a counselor at Center for Neuro Skills in Bakersfield and Theresa Yanez, who just retired after serving 30 years in the probation department.

Permenter has three granddaughters who he dotes on and has the pictures to prove it.

"Some of the events that took place during the old 'initiation' into the Wasco W Letterman's Club were pretty funny... but best not revealed in today's climate," Permenter said.

Permenter sometimes finds himself visiting the Wasco cemetery where his parents, grandparents and stepfather are all buried. "I sometimes attend funerals, Hall of Fame ceremonies, reunions or games."

Permenter revealed that what he loves about being from Wasco is the wonderful supportive town folks, having the opportunity to always find some type of work and living a simple, carefree life that didn't include all of today's modern electronic gadgets.

"We would go to a movie, hit Beaner's or the Slush Pit and take in a Wasco Merchant baseball game where the great Art Demery dominated play in the Golden era of Wasco sports when many championships were won."

The Wasco-Shafter games were also very big back then. He said that planes used to fly over both towns and drop leaflets about the game.

"There was the holding of hands and a long snake dance down 7th Street," he said. "Of course, there was the big fire and burning of the General. I played ball in college with several former Shafter players and being Wasco won those games; it meant you always had bragging rights."

Ned Permenter before the Spanish Club dance in the early 1950s.

Permenter has lived in Bakersfield for 58 years since 1962. He was a teacher and coach at Foothill High for 40 years. His last occupation was a probation officer for a year.

He attended the University of Idaho immediately after high school, then transferred to Bakersfield College and ended up graduating from UC Santa Barbara where he received his bachelors in physical education and minor in biology. He then got his master's degree in physical education from Cal Poly, San Luis Obispo and has a General Secondary Credential.

While working at Foothill High, he was a teacher and coached football and baseball.

"I was honored when Foothill High named their football stadium Ned Permenter Stadium," he said.

All in all, Permenter continues to love his hometown of Wasco and keeps in touch with many of his old friends, even some old football rivals.