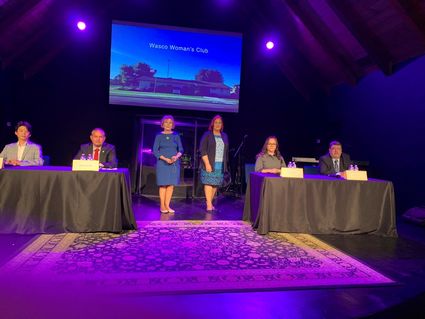 The six City Council candidates - four from District 2 and two from District 4 - gathered Oct. 7 for a forum at Life House Church.

Drescher introduced City Council member Garcia who led everyone in the Pledge of Allegiance.

The candidates each introduced themselves to the attendees and provided a brief biography of their qualifications and dedication to Wasco. These biographies ran in the Sept. 17 and Oct. 1 editions of The Wasco Tribune.

Drescher began the forum by asking the candidates if elected, do any of them plan on reviewing the current city ordinances.

Martinez stated that the ordinances are constantly being changed and there could be some that are outdated. He also said that he wasn't sure which ordinances the author of the question was referring to.

"Many people are trying to navigate and go around them," Martinez said. "I think the city has done a good job."

Olvera added to Martinez's comment by stating that some of the ordinances are outdated, but believes they are the best way to comply and see how they affect residents.

"There are way too many and they are outdated," Ward said.

"These are the rules that the city has agreed to live by," Kim said. "They should be refined and streamlined. We need a more coherent set of rules."

Drescher then asked each candidate how they felt about the High Speed Rail and the loss of Amtrak in Wasco.

"The High Speed Rail should not have been started or even completed," Ward said. "I don't know how we can get Amtrak to stay."

Martinez responded that there is very little the city can do to stop the High Speed Rail from continuing. "The voters voted it in in 2007," he said. "The HSR cannot receive any public funding, and the city has little control."

Martinez continued that Amtrak is subsidized by the city, and won't be stopping in Wasco.

Drescher then asked, if elected, how do you plan to dispose of the old "Labor Camp" site without it costing so much money?

Ward responded that maybe the city can provide a buyer to clean it up and make it into some kind of park.

Another idea Ward suggested was to bring an industrial park into Wasco and/or the city could offer tax incentives.

Kim said he didn't think finding a buyer will happen because of the price; however, if the price is right, a sale could happen. "I would sell it," he said.

Olvera acknowledged that the site is not marketable for sale; however, she envisions negotiation opportunities. "We are experiencing a public health issue," she said. "We could have 20 acres of land available for growth," she said.

Martinez said that it would cost the city $10 million to tear down because of the asbestos in the buildings. "We have to spend the money," Martinez said.

Drescher then asked each candidate to discuss how they would approach the homeless problem in the city and what steps would the candidate take to alleviate it.

Kim responded that it wasn't just a homeless problem. "It is a poverty problem," he said. "I know some homeless people and the situation is sad. Many can't get a job," he said.

Martinez responded to the question by stating that the Kern County Board of Supervisors has been addressing this issue and is doing a good job in trying to help the homeless.

"It is a mental health or drug issue," Martinez said. "They don't want to be helped."

Martinez added that because the courts are unable to enforce court programs at this time, the homeless have been approached about help and say, "they are fine."

"It's hard to find a solution if they don't want to be helped," he said.

Olvera responded that the economic downfall is a factor, not drugs.

"We need to form a task force on this issue and we need to enforce drug issues," Olvera said.

"We need to be able to enforce our codes and laws," he said. "We need to make it uncomfortable for them so they move. We do not need to spend more money on this. More enforcement is needed."

Drescher then asked each candidate how they felt about a Wasco Police Department as compared to continuing with the Kern County Sheriff's Office.

Martinez replied that a city police department would be expensive in cost because the city would have to hire a chief, a couple of lieutenants and more deputies.

Ward stated that Wasco now pays for officer training and once that is completed, a lot of the officers leave for larger cities for more money. "By having our own force, we should pay for our own officers' training," he said.

Wrapping up the questions for District 2 candidates, Drescher asked what one special thing the candidate recommends for the city.

Olvera said that the labor camp should be demolished. "There are 20 acres of land available for growth," she said.

Ward would like the people to come see Wasco after improvements to the entrance to town and Palm Avenue are completed.

Kim said that he would like to see a better city website and provide residents with a way to pay their utility bills automatically.

Martinez complimented Shafter and its industrial complex. "Shafter is forward thinking," he said. "We need to be more creative."

Martinez closed by saying he feels Wasco has one of the best city managers in the San Joaquin Valley.

Olvera closed by stating that the children of Wasco need to see something different and the city needs to improve the quality of life.

Kim closed by stating that he believes he could solve all Wasco's problems. "We all need to put effort together," he said.

Both presented their introductory remarks and stated that they were excited for the future.

"I've been on the council for 16 years," Cortez said. "For the first time, I feel like I am finally able to take a leadership role." He further explained this by saying he will be the council member with the most longevity.

"Our city manager has phenomenal direction and so do the employees with the City of Wasco," Cortez said.

Saldana said that he is running to serve the city. "I feel there are many issues and they need to be addressed," he said.

Drescher then asked each candidate if it was correct that new tracts of homes would put money in the city's coffers. If they get built, do we have the water, do we have a large enough sewage facility and would we have the money to do our part?

Saldana said that since 2007 some of these items have been addressed, changed or solved. "We need to continually work on all of these," he said.

Cortez said that with new housing developments, traffic, safety and water all must be considered.

Drescher then asked each candidate how redistricting the city affected their approach to governing.

"I take the 'whole-city' approach," Cortez said. "Rather than be a part of the lawsuit demanding redistricting and costing the city money, the city chose to redistrict."

Drescher then asked each candidate what they consider to be the main issue for the city.

Saldana said that the water issue has been the most important issue.

Cortez then stated he is most proud of the city finally archiving the City Council meetings.

"It took me more than 15 years to get this accomplished," he said. "My statement has always been transparency improves the quality of life."

Both were asked about the High Speed Rail and the fact that Amtrak would cease service in Wasco.

Saldana said that the city should meet with the right people and hold the High Speed Rail accountable for maintenance.

Cortez then stated that Wasco needs Amtrak and that the High Speed Rail and Amtrak are two separate things.

"Who is responsible for maintenance of the underground tunnel?" Cortez said. "It's never an easy or direct answer as so many think it is."

Drescher then asked each candidate about the farm labor camp and what should be one with it.

Saldana stated that he knows the camp is on the city's radar. Trash needs to be removed from the property on the weekends. "The problem was created when the city accepted the mitigation from the HSR," he said.

"There are still vacant facilities and it will cost $6 million to demolish the camp," Saldana said. "The HSR caused the problem."

Cortez stated that the city is currently seeking a resolution to this issue and it will cost $10 million to demolish the buildings, due to the asbestos in the homes.

Drescher then asked how the candidates felt about the recent water crisis the city faced.

Cortez said that during the summer months, the water pressure in parts of the city was an issue of concern. The city manager pushed water conservation after city staff identified where the water issues were and the water rationing worked.

"The city is applying for a $20 million loan from the state to repair its water issue," Cortez said. "Currently, the city is out of the critical zone."

"When residents complain about their water bill, the city investigates each claim individually, Cortez added. "The city will send someone out to inspect the meter."

Saldana stated that the city needs to quit cutting corners and solve the problem.

Drescher then asked each candidate how he felt about a city police force as compared to the sheriff's office.

Saldana stated that the current budget is not adequate to get the city's own police department. Maybe in the future, this is something the city can look into further.

Cortez mentioned that the Kern County Sheriff's Office fees go up each year. 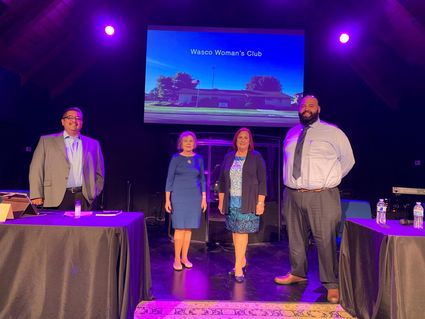 "The big problem is the sheriff is not responding to our concerns," Cortez said. "The problem comes from the top. We either need a new sheriff who cares about the city of Wasco or we need a top-notch police department."

Cortez also said that regarding the fire contract, that too, is going up every year. The city is currently looking into an alternative for this.

Wrapping up the second forum, Drescher asked each candidate what they feel the most important issue is.

Cortez said that he is excited about how the staff analyzes the city's problems. "I have never been more excited about the future of the city of Wasco," he said.

Saldana said that he, too, is excited to be a part of the community and to reach out to residents. He is also looking forward to interacting with the community members.