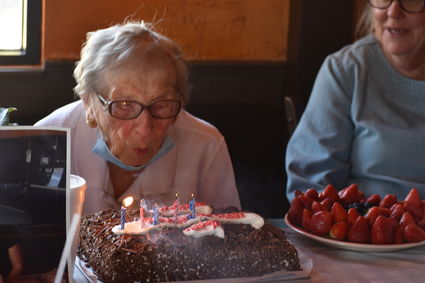 Betty Petrie blows out the candles, celebrating her 105th birthday.

Betty Petrie and a few of her close friends gathered at Giovanni's Italian Eatery in Shafter recently to celebrate Betty's 105th birthday.

Soutchay said that in 2006, soon after taking over the restaurant, Betty would come in every Thursday with Ione Lollar. They would order turkey sandwiches after they had got their hair done at a local salon.

A friendship was struck up and lasts to this day. After a time, according to Soutchay, the group grew, with Margaret Acosta and Julie Disinherle joining in.

Each year, they would take turns hosting a little celebration for their birthdays. Petrie is still sharp as a tack and lived on her own in Shafter until two years ago when she moved into an assisted living center in Bakersfield. She said that still keeps up on the news in Shafter by getting a copy of the Shafter Press.

"I will read it and then pass it to another local resident who is from Wasco. So, the paper makes the rounds."

When asked what her secret was to making it to such a milestone, Petrie said, "Just good genes I guess."

Petrie was born on Oct. 29, 1915, in Los Banos. She came to Shafter over 50 years ago. She taught at the elementary school for over 30 years, retiring to enjoy her time by reading, doing arts and crafts, and spending time with friends.

Petrie also served her country during World War II, enlisting in the Navy and joining the WAVES in 1942. She was stationed in Washington, D.C.

Last year at a birthday celebration in Bakersfield, attended by Vince Fong and Bakersfield Mayor Karen Gho, among others, Petrie was presented with an official blue Honor Flight jacket. She was invited to go on an honor flight, but her health wouldn't permit it so they gave her a virtual Honor Flight experience in addition to the jacket.

The WAVES were the United States Naval Reserve that was established in 1942. Petrie loves to talk about her teaching career, her friends and family, and her hobbies, but she is still tight-lipped about her experiences and duties in her Naval career. "Loose lips sink ships," is a motto that Petrie goes by to this day.

"I can tell you that I served in the WAVES beginning in 1942, but that is all you're going to get," quipped Petrie.

The group had a wonderful time as they ate and reminisced about their close friendship.

Petrie, in addition to living on her own until just a couple of years ago, Petrie still drove herself around until she was 95 years old.

"She is such a special lady," said Soutchay. "We love her and are happy to do this for our special friend."