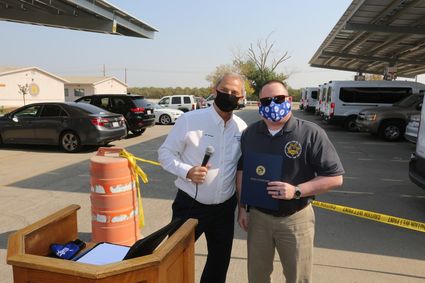 Last week on Nov. 4, the prison held a luncheon in Sutton's honor, recognizing his many years of service for the Department of Corrections.

Sutton and his twin brother, Nick, were both educated through Wasco schools and graduated from Wasco High School. They both worked in the cotton, potato and alfalfa fields as young boys.

"We started out playing T Ball, youth football with the Packers, ran track, played baseball and Little League," Sutton said. "I got a varsity letter in football when I was quarterback and Nick was a receiver.

Sutton has been in law enforcement since he decided on a career track while in college. He originally thought he was going to go into education and become a teacher, but instead enrolled in the police academy.

He was first employed at the Porterville Police Department as an undercover cop. At that time, Sutton applied for the Department of Corrections and was assigned to what is known as the Ironwood Prison in Blythe.

Sutton arrived at Wasco State Prison in 1991 and he said at that time, it was an annex but is now incorporated into the city. "The site was originally a dove-hunting spot," he said.

Sutton's retirement plans include being home at the Central Coast full-time and learning to adjust to the retirement lifestyle.

"My wife and I are planning to vacation and travel to specific spots around the country and Europe and possible retired annuitant work in the future," Sutton said.

Sutton added that the most important thing he will miss in retirement is no longer working around such a "great group of correctional employees."

"I consider myself the luckiest person in the world to have been the warden at the best prison in the State of California," he said. "I will forever be grateful for the opportunity and all of the support that I have received during my tenure as warden for Wasco State Prison – Reception Center."

Sutton added, "I couldn't be prouder of the institution of what we have accomplished together, especially with dealing with the covid-19 crisis."

Sutton also received accolades from several attendees at the luncheon including a plaque from VFW Post 6742. Superintendent of the Wasco Union Elementary School District Kelly Richers spoke about Sutton as well.

"I was invited to John Sutton's retirement and was asked to speak, as someone was under the mistaken impression that I was his high school basketball coach," Richers said during the luncheon. "I was not his coach, but have worked with him for the many years he has been warden at Wasco."

Richers added that as a hometown boy, Sutton made extra efforts to assist the students of Wasco, and the families of Wasco students, through the efforts of the prison to provide food baskets, fundraising drives and other material goods to those in need.

"Through his leadership the community and the prison have been drawn closer together as partners in improving Wasco as a community," Richers said. "I have great admiration for his dedication and ability to work out all the intricate details of how to make such associations work while performing such a complicated job as his position demands. He is obviously admired by those with whom he works and it was a bittersweet retirement event to have to see him leave his position. I wish him a great retirement."

Farley said it has been a trying year, due to the pandemic, and "I have to say, John has handled the very demanding and oftentimes stressful protocols that a highest prison administrator has to implement due to this pandemic with a steadfast and calm leadership style. It is his leadership style that has kept Wasco State Prison's Management team as well as support staff rank-and-file together through this difficult time." 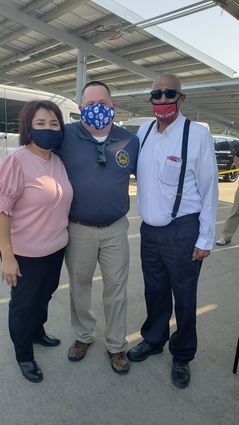 Farley also said that because John grew up in Wasco, it is only fitting that he retires as warden of Wasco State Prison.

"John has always had this community and its partnerships at the forefront of his mind," he said. "He has made numerous donations in support of this community through the Orange Heart Foundation, local athletic clubs, the VFW and many charitable donations to the elementary school kids and community residents during the holiday seasons."

In his goodbye message to Wasco, Sutton said, "I want to personally thank the entire community of Wasco for all of the wonderful memories. I am very fortunate to have grown up in a small town, which taught me the values in life including, work ethic and the guidelines for success. I will forever be a proud Wasconian!"