Council debates how mayor is selected 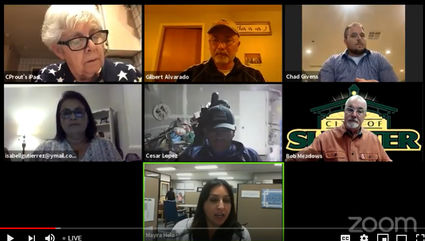 The City Council discusses possible change in way the mayor is selected.

The Shafter City Council tabled a discussion in how the way the Mayor of Shafter is selected. Currently, the selection of mayor is done by a majority vote.

Mayor Gilbert Alvarado proposed this should be done on a rotating basis instead of by a majority vote. He cited that other cities in the county select their mayor in a similar manner, with the council members taking a turn to serve as mayor.

Alvarado said his reasoning is that the current selection process creates division in the council and not unity.

City Manager Gabriel Gonzales said that the city has discretion to make a resolution to change the way the mayor is selected without changing the charter.

"It says in the charter that the mayor is selected by the council and that person serves at the pleasure of the council," Gonzales said.

Givens and Councilmember Cathy Prout thought that it should be tabled and discussed at a later date.

Alvarado said that in all of the years he has been on council, he had not had the chance to serve as mayor until the most recent vote.

"I think that the way we do it now creates anger, fighting, and bad feelings," said Alvarado. Givens said in the years he has been associated with the council, there has only been one instance in which there was a 3-2 vote when selecting the mayor.

This instance is the most recent vote, when newly elected councilmembers Cesar Lopez and Garcia voted with Alvarado to make Alvarado mayor and Lopez as Mayor Pro-Tem.

The issue was put on hold and can be revisited at the Dec. 15 meeting or discussed at a Strategic Planning Retreat.

Garcia will be replaced at the end of the year by newly elected Pete Espinoza.

In other business, the City Council has decided to support a community drive-in movie event. Alvarado said that he is concerned about the safety of the event. It was proposed that the city contribute $1,500 toward the event to provide the audio-visual equipment. Prout said that she is all for the event and the city should support the event, but the council shouldn't contribute any money towards the event.

"I know that there are plenty of organizations that could step up with donations and support for the event financially," Prout said.

There is not a time or place for the event as of yet, but the event will be supported by the city with in-kind services, such as waiving of fees, logistic support and policing.