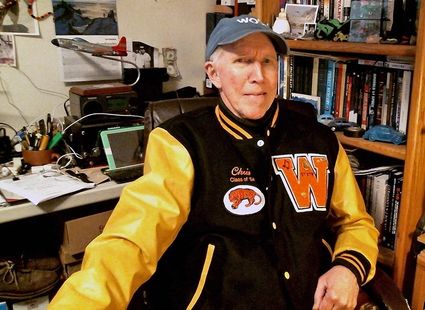 Christopher Carey's life after graduating Wasco High School in 1964 took him across the world, living in multiple countries and having the adventure of a lifetime. However he remembers fondly his time in Wasco.

Carey was busy in school by playing in the band and orchestra, competitively swimming and also ran for student body president; however, that wasn't a win for him.

After high school he immediately enrolled at Bakersfield Junior College (as it was called then), later obtaining his bachelor's degree in history from Antioch College in Yellow Springs, Ohio, and onward to Trinity College in Dublin, Ireland, where he received his master of arts.

Carey grew up in Reedley, San Francisco, Wasco and Oahu.

He remembered Robert Maxwell as principal at the high school, later to be replaced by Jack Cutner. He reminisced about some of his former teachers such as band teachers Robert Bangs, Mr. Saindon and Mr. Scharfenberg, Spanish teacher Arthur Parrot and English teachers Mr. Ginn and Miss Lewis.

Carey relayed a story that he thought showed the caliber of humor that went on in school during those days.

"Miss Lewis, our English teacher, had a very dry sense of humor," Carey said. "Every year at the end of the term, she would 'spring' her one joke on the class, which was 'Why did Editor James Russell Lowell name the Atlantic Monthly the Atlantic Monthly?"'

Carey referred to his classmates as "savages" because they made it a point to pass along the correct answer to each year's class so they could foil her one annual effort to be funny. Carey says the correct answer was "Because it was a notion." Carey added that Miss Lewis would appear crestfallen again and again upon hearing that.

Carey enjoyed his time as a Tiger.

"The Tiger always seemed so much better a school mascot than most of the other school mascots ... especially our main rivals, the Shafter 'Generals,'" he said. "I can easily imagine being a Tiger, but a little General?"

He joined the United States Air Force in 1966 because he admitted his GPA was "uninspiring." He trained as a medic and ended up in flight medicine, which provided preparation for a return to civilian life. When he got out of the military, he returned to the Bay Area, lived and worked in medical technology and studied at University of California Berkeley and Merritt College for 15 years before accepting the first of a series of overseas medical project contracts for the Saudi Arabian government.

He also became an associate of ASA, Inc., an international organization for medical defense against chemical and biological warfare threats and later lived in the Republic of China. He ended his career as Associate Treasury Program Analyst for the State of California before formally retiring in 2013.

Carey says one of the most interesting aspects of his life was working with the Saudi Arabian Ministry of Defense and Aviation as a flight medicine specialist, while overseas in the 1980s and 90s. He said that they were given very liberal holiday leave allowance and he spent his time traveling and touring through German-speaking Europe, able to enjoy mountaineering in the Swiss Alps near Zermatt and also often taking ski holidays in Switzerland.

"One of my clients whilst in Saudi MoDA employment was Saudi Oil Minister Zaki Yamani, who was at one time perhaps the most important and influential man in the entire world due to Saudi Arabian preeminence in the world's oil market," Carey said.

As a retiree, Carey fills his time by writing and is an aviation history consultant for aviation museums including the Aerospace Museum of California at Sacramento and the Edwards Air Force Base Museum/NASA Dryden FRC (now 'Armstrong FRC').

Some of Carey's books include US Chemical and Biological Defense Respirators, Marooned on Moloka'i, Santa Cruz Sargasso and scattered poems from the 70s and 80s. "I also have several manuscripts underway," he said.

His fondest memory of Wasco High School is admiring the "lovely 'Banner-Line Girls' from my front rank in the marching band at parades and football games," he said. "But some other fond memories center around my Honda motorcycle and my battered (but much-loved) 1940 Chevrolet Master Deluxe Coupe. I had a close friend Steve Kroeker in high school and we were the very first students to buy the new Honda 50 Japanese motorcycles in 1962. I still have motorcycles today."

Carey admits he was shy in school and was not a socializer but had very good close friends. He quietly admired Annette Smith, the chemistry professor's daughter, also class of '64.

Carey and his friends Kroeker, David Hood and Peter Peterson went on a "surfing safari" to Pismo Beach in his '40 Chevy. He reflected that it was the very night of the disastrous Anchorage earthquake that did so much damage along the Pacific Coast. 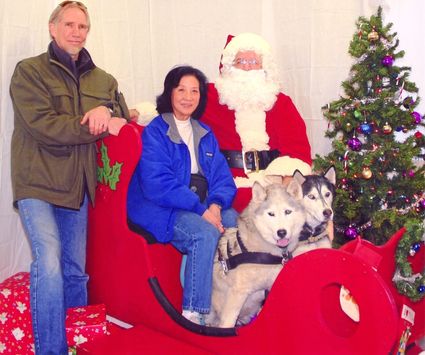 Christopher Carey with his wife and two dogs at Christmas.

"Our fogged-in camp on the beach sand was almost wiped out by the resulting tsunami," he said. "Fortunately we were not harmed, but that memory will always remain with us all."

"This was all part of the standard Beach Boys uniform of those days," he added. "Our antagonists were the so-called "Greasers" who were not into surfing and thought we were all nerdy weenies! (Think Fonzie of 'Happy Days.')"

He attended some school parties in those days, but felt out of place with his dancing skills and compares it to a Rhesus Monkey on LSD.

Carey currently resides in Sacramento with his wife and two dogs and continues to find himself busy with writing or consulting.