Maple School girl gives back to the community 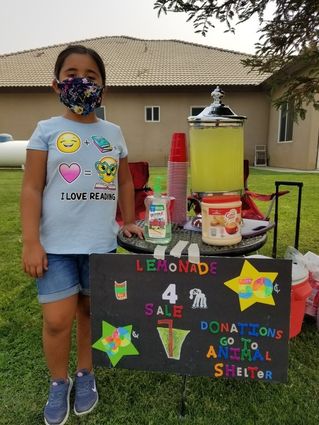 Jackie Silva stands in front of her lemonade stand in September.

Only 9 years old, Jackie displays a maturity beyond her young years. She began with a lemonade stand and with that money, purchased toiletries for residents of Golden Living and Carrington House in Shafter.

"Jackie made $456.11 and asked her dad to pay up since he said he would match what she earned. She ended up with $912.22." her mother Maria Silva said. "We were able to buy tons of cat and dog food that Jackie was able to donate to the Wasco and Shafter animal shelters."

Maria said that John, the manager at Tractor Supply on Calloway, gave them his employee discount and also donated more food, Frisbees and bags to collect animal waste.

Jackie has begun selling eggs and it's a family effort.

Jackie's three older sisters contribute to her endeavors by posting information on Instagram advertising what project she is working on.

"Friends and family all donate," Maria said. "We had someone call from Los Angeles to buy a dozen eggs from Jackie; however we had to tell them we were selling them locally only."

Maria said that many times if she can't find Jackie, she is helping her dad around the farm.

She gets up early, feeds and cleans the chickens in the coop, cleans and feeds the goats in the pen and makes sure to spend time with the horses on the property.

"We also had a vegetable garden this year," Maria said.

Jackie loves to be outside. She has no desire to be inside playing computer games. 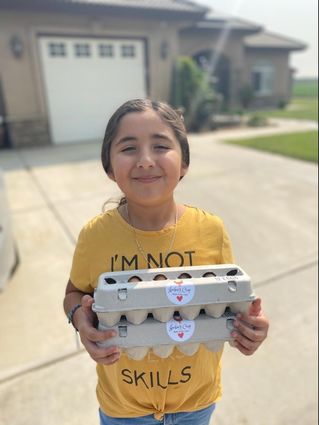 Third-grade Jackie Silva is now selling eggs from her chickens.

She spends a lot of her time reading and working on projects. Her library consists of The Babysitter's Club books along with some of the classics such as Alice in Wonderland and Black Beauty.

The Silva family is very close knit and they ride quads together, work the farm together and sometimes watch movies together.

"Jackie likes to watch movies with her older sisters," Maria said. "Sometimes she gets upset when her sisters tell her she has to leave the room because they are watching a scary movie that isn't age appropriate."

The family has placed a bright red mailbox on their front porch so youngsters can write their letter to Santa and the letters will be delivered to the local post office.

Jackie's next question for her mom was, "Mom, what are we doing next?"