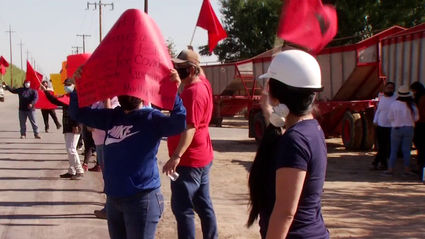 Primex workers held picket signs in protest of the way they were treated during the coronavirus outbreak.

Primex, the Wasco nut processor, was fined over $77,000 for violations related to the coronavirus outbreak that took place at the company in June.

H&R and United Staffing disputed the state's allegations and insisted they take all appropriate steps to protect their employees. An emailed statement from United called its citations "unsubstantiated, unreasonable and punitive." Both companies said they are appealing their fines.

Primex employs as many as 400 people processing and packing locally produced almonds and pistachios off Wildwood Road.

Paperwork filed by the Department of Industrial Relations says between May 25 and June 15 Primex failed to put in place and maintain an effective program for protecting its employees and those of all three staffing companies from the spread of covid-19. Among the violations alleged is a failure to provide or ensure the use of face coverings.

Primex also failed to train its employees and those of United Staffing on measures for preventing the disease's spread, spotting signs of infection and the use of cleaners and disinfectants, according to the department.

A lesser citation against the company says it failed to notify the state after one employee went to the hospital June 16, followed by another two days later, for illnesses related to covid-19.

In June, workers picketed the company, trying to highlight the conditions at the plant, with workers saying that there were workers that were on shift that still had tests pending results.

To compound the problem at the company, there were over 30 family members of affected workers who had tested positive.

The UFW, working with news media across the state, helped employees at the plant draw attention to various concerns about conditions at the plant. They said Primex supervisors downplayed infections among plant workers and wouldn't guarantee the job security of workers who missed work because of the outbreak. Another allegation was the company scheduled people to work even when virus test results were pending.

Primex disputed each of the allegations at the time. It said July 6 the only people working there had tested negative or had a written release from a doctor stating they could return to work.

The company said that they were looking forward to the appeals process.