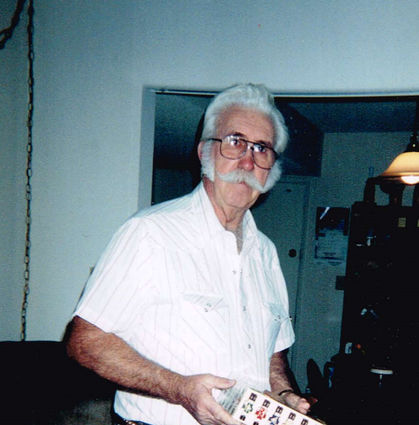 He was born Sept. 29, 1940 in Lavaca, Arkansas, to Carroll Bradford Martin and Myrtle McCrae Martin. He is survived by his son. Billy B. Martin. and daughter in-law. Melissa Martin. and his grandchildren. Luke, Austin and Alyssa, all of Shafter.

Billy also leaves behind his spouse of 22 years, Cecilia Hill. He was a bonus dad for Cecilia's children, Ashley, Kenny, Greg and Tommie Sue, all of Shafter. Billy was known as "PaPa" to all their grandchildren. Billy is also survived by his stepdaughter, from his previous marriage, Kimberly Howard, and he was "PaPa" to her three children.

Billy grew up in Arkansas and was enlisted in United States Army on Nov. 3, 1958 and served as a National Guard until he was honorably discharged on Oct. 31, 1966. He moved to Kern County shortly after being discharged from the Army. After moving to California, Billy became a bus driver at Shafter High School in 1966 and drove a school bus until 2002 when he retired. Aside from driving the school bus in the early mornings, he had his own sprinkler and gardening business and worked a custodian at Shafter High School in the evenings.

Over the years Billy was known and loved by many people in the community. He was known by many small children as the "candy man," he always had a pocket full of smarties ready to hand out. His iconic mustache made him stand out in a crowd, he was a local celebrity of sorts. Billy had a heart of gold and will always be remembered for his kindness and generosity. He was a very social man and everywhere he went he knew someone or someone knew him.

Billy was enlisted into the Army during his senior year in high school and was not able to graduate, but years later he received his GED and was very proud of his accomplishment. Billy was a life-long learner as he even completed college courses as a master gardener in 2011. He loved to share his knowledge, and days before he was hospitalized, he helped his son-in-law fix his sprinkler system and plant winter rye grass. He had a passion for growing things especially succulents. Billy was a life-long Arkansas Razorbacks fan and wore his hog head hat with great pride. He was an avid collector of many things especially baseball cards and thought he could salvage anything. He will be greatly missed by so many.

A memorial service will be held at 10 a.m. at Peters Funeral Home in Shafter for his family. The family would like to invite anyone who wants to pay their respects to the graveside services at 11 a.m. at the Shafter Cemetery.